"Alien Garut, you should know mankind's true future by now."
"What? The human race holds no future!"
"You have commited the worst crime by changing the Akashic Records!"
"What are you talking about Ultraseven, I don't understand what you mean!"

An evil invader, Alien Garut appeared on Earth after Ultraseven was banished to the Dark Nebula and the Earth Defense Forces had signed a peace treaty with all the invading alien species. Disguised as a human researcher, named Tachiro, in an observatory, Alien Garut monitored as Ultraseven attempted to contact his former human host. Once meeting the young man in his true form, proclaimed to be an observer, wishing to watch humanity's evolution first hand, however, Alien Garut was nothing more than an invader but he was different in that he wished to invade legally. When the TDF, with the help of aliens, stumbled upon a way to read the Akashic Records, Garut intervened and brought back a copy that showed mankind's days as the dominant species on Earth would come to an end. Alien Garut acted from behind the scenes using others to do his dirty work as he tried to take over the Earth, the Alien Pegassa, Alien Godola, psychic children, and even a traitor in the TDF but the Ultra Guard and Seven's host (who eventually remerged with the Ultra) bested all of their attempts. Eventually Alien Garut turned his attention to the Plant Life form (the first of many evolved plants that could take on human form), seeking to acquire it as the false Akashic Records dictated that its kind would over take mankind as the dominant species. As Seven managed to reach the location of the Akashic Records, he was attacked, as Alien Garut was trying to stop him and his allies from learning the truth which Seven nonetheless did discover, that his copy of the Akashic Records was a lie, Mankind, the plant life forms and the appearance of a secondary nervous system in mankind would combine to create the final and new dominant species on Earth.

Fighting the Ultra Guard, Alien Garut summoned his monster pet Gaimos to attack the Ultra Guard. Just when it seemed things were over for the humans, Seven appeared in giant form and began to trounce the monster. Alien Garut changed to giant size to battle the Ultra, when Seven accused him of tampering with the Akashic Records, one of the most serious of ALL crimes across the universe, even more so than invasion. Alien Garut denied the allegation and simply attacked with his monster, almost killing the Ultra in a fury of energy blasts. However, when he sent his pet to finish off Seven, the Ultra rose up again and ended the monster. Alien Garut himself was defeated by Seven's Wide Shot, ending his schemes. 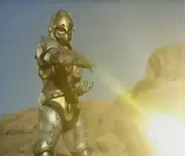 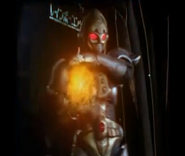 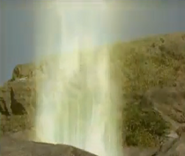 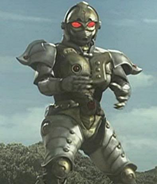 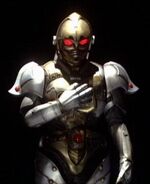