Alien Galo were one of the alien races to signed a diplomatic agreement with TDF and the rest of the Earth. However, they feared that the Earth forces would someday plan an invasion of Planet Galo, in response Alien Galo planned to betray their promises and invade Earth first. For this to work, they kidnapped Alien Kyuloo, a shipwrecked alien that lived on Earth since 20 years prior and forced him to rebuild Daitekkai, his old spaceship. With Daitekkai completed, they piloted it as the spaceship emerged and the UG was sent to destroy it. Masaki Kazamori (under possession of Dan Moroboshi) transformed into Ultraseven and went into the battle but was overpowered. As it seemed to be the end of Ultraseven, Alien Kyuloo, who was converted into energy by Alien Galo in his kidnapping had temporary takenover the machine allowing Ultraseven to finish the robot and Alien Galo once and for all.

An Alien Galo, or at least a very similar creature, was seen as one of the test subjects of Mabuze's experiments to create the ultimate creature. I Can't Hear Your Voice 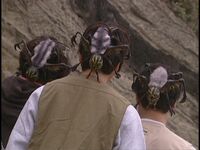 Possession
Add a photo to this gallery
Retrieved from "https://ultra.fandom.com/wiki/Alien_Galo?oldid=517068"
Community content is available under CC-BY-SA unless otherwise noted.