The Galagala were first seen in pursuit of Yullian, shooting her down and taking the form of humans. The aliens and their emperor were looking to kill Ultraman 80 to avenge the loss of their prince to the Ultras. They later kidnapped UGM officer Jouno and tortured her, believing Jouno to be Yullian. When Takeshi, UGM officer Ikeda, and the real Yullian went looking for her, the aliens hid in the mountain they were using to infiltrate the Earth and ambushed them. One of the aliens threw a spear at Takeshi only for Jouno to take the hit. Takeshi transformed into Ultraman 80 and destroyed the mountain, killing the Galagas and leaving their emperor to fight. 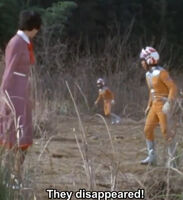 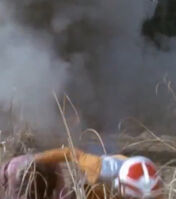 Bomb
Add a photo to this gallery

Add a photo to this gallery
Retrieved from "https://ultra.fandom.com/wiki/Alien_Galagala?oldid=510003"
Community content is available under CC-BY-SA unless otherwise noted.