None
Alien Fire (ファイヤー星人 Faia Seijin) was an alien from Ultraman Ace that appeared in episode 39.

Another alien with plans to conquer Earth, Alien Fire arrived with another of Yapool's Choju, Firemons. He disguised himself as Dan Umezu's uncle, who had came over to celebrate Christmas and earned the trust of Seiji Hokuto, after saving a girl from falling from a building. Later that night, TAC had plans to create a new weapon called the Silver Shark, but was ambushed by Alien Fire and a long shootout ensues, with Hokuto managing to shoot the alien's leg. The alien escapes, but Hokuto finds his bracelet.

The next morning, Hokuto finds Dan's uncle, and realizes that he is the one that attacked TAC that night  by noticing his wound, and deduces that he is an alien all along by his bracelet. Alien Fire then gives chase until he is cornered, revealing his true form. He then summons his Choju, Firemons, and Hokuto transforms into Ultraman Ace. The two giants battle, with Ace gaining the upper hand, but not until Alien Fire gives Firemons a flaming sword. Ace tries to use the Metalium Beam, but to no avail, forcing him to dodge his attacks. Unfortunately, Ace trips and is eventually impaled by Firemons' sword. With Ace defeated, Alien Fire decides to use the Choju to destroy TAC's newest weapon.

As Ace is being healed by Ultraseven, Alien Fire sends his Choju to attack TAC. Eventually, Hokuto transforms into Ace and the two giants battle again, but just like before, Ace had a hard time dodging the Choju's sword, until TAC shoots it with their newest weapon, destroying it. With Firemons destroyed, Alien Fire finally transforms into his giant form. Alien Fire takes the sword, causing Ace to use a cable tower to block his attack. The tower is then cut into half, but not before Ace throws it to the alien's arm. The alien loses his sword, with Ace impaling his head with it and  finally destroys the alien with his Metalium Beam. 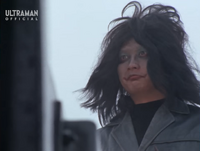 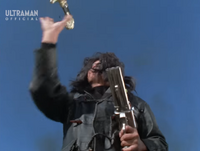 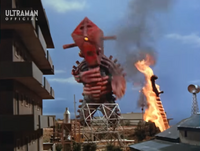 Flame Sword
Add a photo to this gallery 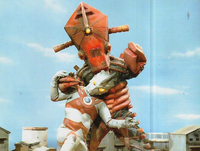 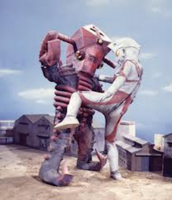 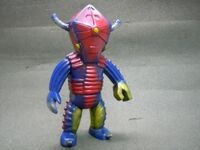 A figure of Alien Fire

Alien Fire as he appears in Ultraman Graffiti: Wild! Ultra Country
Add a photo to this gallery
Retrieved from "https://ultra.fandom.com/wiki/Alien_Fire?oldid=510001"
Community content is available under CC-BY-SA unless otherwise noted.