Unknown
Alien Fanton (ファントン星人 Fanton Seijin) are peaceful aliens that appeared in the TV series, Ultraman Mebius. True to their subtitle, this alien race are notorious for their gluttonous appetite, though actually friendly in nature.

Their race's name, Fanton, comes from the Chinese word "Fan Tong" (饭桶, Rice Bucket), which is commonly a slang used as an insult, mainly used to call people that only think of food.

Alien Fanton is based on the Ultra Q Kaiju Kanegon and a snail.

The Alien Fanton was one of the few aliens in the universe to maintain a peaceful relationship with Earth. When one of the Fantons contacted GUYS to alert him of his arrival, GUYS arranged to meet him in a forest. When they did arrive, he told GUYS of something called "C-Pin 929"; an item he was looking for. After the introductions, GUYS brought him back to their HQ for a feast. The Fanton then proceeded to eat everything on the table, and then fell asleep shortly after finishing. After finding Alien Fanton's C-Pin 929 and returning it, Alien Fanton bid farewell to GUYS and repayed them with clues about Tsurugi's identity, as well as a gift worth a great fortune for their kindness. Fanton's Lost Item

Fanton would return in episodes 49 and 50 when he, Zamsher, Alien Psychokino, and Ultraman Hikari came to help GUYS fight Alien Emperor. Fanton himself however did not participate in the fight physically. After Alien Emperor was soon destroyed, Fanton and Psychokino left quietly and happily. Dark Clouds of Despair -Final Trilogy II- Words from the Heart -Final Trilogy III-

While Ultraman Hikari searched the galaxy for the being known as Tsurugi, he met up with two Alien Fantons, who directed him in the direction of a desert-like planet. In which Tsurugi himself did not exist, but something better, the Ultraman King. Ultraman Mebius Gaiden: Hikari Saga

An Alien Fanton appeared in this series by the name of Dr. Gourman (グルマン博士 Guruman Hakase). He is a member of Xio's Research and Development lab team and the team's benefactor in designing combat vehicles. He takes refuge at the base's lab, where he is given a Japanese-style room next to Daichi Oozora's cubicle and sometimes can be seen sleeping after eating his meals.

Also, a cybernetic version of Alien Fanton, Cyber Fanton (サイバーファントン Saibā Fanton) was created by incorporating the specs of an Alien Fanton to a Cyber Card. It appeared in the final episode of Ultraman X. After Ultraman X spoke out to Gomora and striked Greeza right in the center of his chest, Fanton's Cyber Card, along with all of the other Cyber Cards, traveled to X and united with him. Cyber Fanton's power was used to help form the Hybrid Armor and power up the Ultimate Xanadium to defeat Greeza once and for all. Fanton, along with the numerous other Cyber Cards and Spark Dolls, then appeared and thanked Daichi as he thanked them. The Rainbow Land

Alien Fanton was disguised as a human selling clothes and other items, seemingly under a bridge. He was actually an informant that Homare Soya sought out to get information on the Monster Bomb that the Villain Guild had acquired. After giving the Fanton some homemade 15 year old Caspian Sea Yogurt, which Fantons can get drunk on, he turned back to his original form and told Homare and Hiroyuki about the Monster Bomb's origins; an Alien Zetton named Zolin acquired it from Alien Markind and wanted to sell it off, but it was stolen by someone during transportation. Fanton also noticed Hiroyuki's Hinode Juice bottle cap and was very interested in it because it was very valuable in his planet, and offered to provide them with more information in exchange. Requiem of the Wolves

The same Alien Fanton was approached by Homare and Pirika Asahikawa, who asked him for a location where the Villain Guild usually gather. Fanton tells them that the Villain Guild has been acting strangely lately, just as Grimdo was about to arrive on Earth. He tells Pirika not to access a website where aliens worship Grimdo, but she does not listen and gets hacked. Fanton is helpless to do anything about it. Later, he starts panicking when Grimdo arrives, saying that the Earth has been cursed. Ultraman Taiga The Movie: New Generation Climax 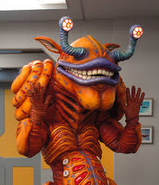 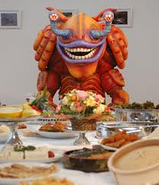 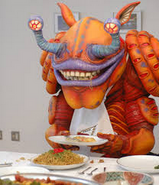 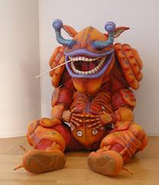 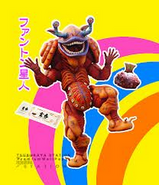 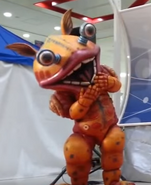 Fonta in a stage show