The Alien Fantas were peaceful aliens that were in progress of making a space utopia, but became carried away by their inventions. Their androids went haywire and rebelled, slaughtering their creators and deciding to invade Earth. Using their flying saucer, the androids invited Earth to join the space utopia. UGM talked about the Fantas incident with everyone except Captain Ooyama, believing the space utopia was true, with even Takeshi Yamato being successfully deceived by the androids.

The night after, Takeshi was assaulted by three people while walking back to the UGM HQ. Defeating them, the UGM Science division discovered that the "people" were in fact androids, leading to the failure of the first part of the Fantas plan. The next day the Fantas prepared to meet with the United Nations, while an android drone spied on Takeshi. After destroying the drone, Takeshi became suspicious and attended the UN meeting. After witnessing two of the aliens shake hands, he used his x-ray vision on them, revealing the two to be androids. Panicking, his reaction caused him to be arrested.

While Takeshi was in his cell, the Fantas androids arrived and told him their history. After revealing this, they threatened to kill him for being Ultraman 80, only for Chief Ito to incapacitate them. As the Fantas' plan fell to pieces, the androids rushed into their UFO and turned it into Robo-Fo. Takeshi transformed into Ultraman 80 and destroyed the robot, ending the android's evil plans. 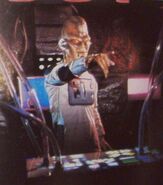 Add a photo to this gallery
Retrieved from "https://ultra.fandom.com/wiki/Alien_Fantas?oldid=382183"
Community content is available under CC-BY-SA unless otherwise noted.