It was a normal day at Super GUTS's base until a saucer was detected. Two Super GUTS members were investigate only to be shocked into unconsciousness by two Alien Fabirases. The Alien Fabirases disguised themselves and infiltrated Super GUTS's base. Upon entering the main control room, the Alien Fabirases revealed their true form and called for Hanejiro, who flew towards them. Both Alien Fabirases explained that Hanejiro was a guardian of sorts to watch over Mons-Ahgar in his imprisonment on Planet Meranie and that their homeworld was destroyed through another one colliding with it. With the Alien Fabiras returning to their saucer, they told the Super GUTS members imprisoned in strange energy cocoons that they were planning to take Earth for themselves. However, Hanejiro freed them from their prisons and showed one of the Alien Fabiras a projection of life at Super GUTS. The Fabiras B said that taking one's happiness is invalid but Fabiras A refused, having been influenced by the magic stone which he picked up from Planet Muzan and eventually turned into Devil Fabiras, forcing the one still normal to drop off the Super GUTS members and move higher into the atmosphere.

Devil Fabiras attacked and destroyed the TPC base of Getseco without much effort. Shin went out to fight Devil Fabiras himself and turned into Ultraman Dyna. Neither Dyna nor Devil Fabiras could best each other during the battle, even when the Solgent Beam failed to do much except reflect and slightly burn the alien's chestplate. Once the burn was regenerated, Devil Fabiras released energy tentacles from it to wrap around Dyna. However, Dyna went into Miracle Type and teleported himself out of the tentacles' binding and reappeared behind Devil Fabiras to continue his assault on him only for it to fail. However, Hanejiro quickly showed Dyna Devil Fabirsa's magic stone that influenced him. After tearing off a piece of the chestplate and hitting Devil Fabiras in it, Dyna used the Revolium Wave to blast the chestplate into another dimension, forcing him to reduce back into Fabiras. Once Devil Fabiras was reduced back to Alien Fabiras A, the saucer's tractor beam lifted him back in and took off, taking Hanejiro along as it agreed to accompany them once again.

After Alien Dehadoh race planned to send Casa Madara, their minion was to guard the Planet Earth for invasion, their actions had been detected by Alien Fabiras and they launched Hanejiro to Earth to warn Super GUTS and Dyna though their actions were somewhat late since it landed on the hands of Alien Miji instead, though the message would finally be conveyed to them. 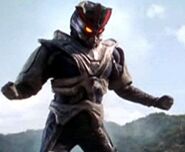