Alien Endeal (エンディール星人 Endīru Seijin) was one of the Emperor's executive officers in the Great Ultra War. He has only appeared in Televi-Kuns, mostly for Ultraman Mebius. He was created from a drawing contest in Televi-Kun magazine.

One of the remnants of Alien Empera's generals, both Jiorugon and Alien Endeal tried to get revenge on their masters' defeat by fighting the Ultra Brothers. Alien Endeal summons his assistant, King Joe Black, however both him and the robot were defeated by the Ultra Brothers and Endeal met his demise at the hands of Ultraman Mebius Infinity. 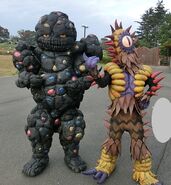 Add a photo to this gallery
Retrieved from "https://ultra.fandom.com/wiki/Alien_Endeal?oldid=491142"
Community content is available under CC-BY-SA unless otherwise noted.