None
Alien Coro (コロ星人 Koro Seijin) is an alien that appeared in Ultraman Leo.

One day while jumping his space bed, Alien Coro accidentally fell into the Earth, along with his bed. He was founded by several children while they were playing as MAC. After Alien Coro fainted out of hunger, the children brought him to a house. While trying to find a food he liked, one of them offered him a donut, which he ate.

The next day, Renbolar, his monster flew from its home planet and to Earth to find his master, much to both the children and Alien Coro’s delight, but it also caught the attention of MAC, who tried to evacuate the children. However, Alien Coro proved his control over the seemingly docile monster as he had him doing tricks such as backflips, silly poses, and magic tricks. At MAC's request for the city's safety, Alien Coro had to send Renbolar back home, but suddenly his tail was pulled out by the greedy kids who wanted more. This caused Renbolar to go wild and out-of-control, attacking the city they were in and even MAC as well. Luckily, a storm blew in and the rain frightened Rebolar away.

The next day as Alien Coro was regenerating a new tail, Renbolar returned and devoured a rainbow that appeared in the sky, created by yesterday's storm. Because of this, his strength increased as he resumed his rampage. Gen then transformed into Ultraman Leo and thus the two did battle (comedically) in a boxing-styled battle that went on for well over 7 rounds until Alien Coro literally threw in the towel, hoping to keep his pet monster alive, which Ultraman Leo did by knocking out the monster. The next day, Renbolar awakened but was bounded in chains until Alien Coro’s regeneration was complete. But this didn’t stop the monster as it easily broke throw the chains and resumed his rampage. Gen once again transformed into Ultraman Leo to hold off Renbolar long enough for Alien Coro to finish his regeneration. Finally, the new tail was completed and Alien Coro regained control of his monster. Renbolar apologized to Ultraman Leo, who accepted the apology, as well as the city, and the children. Alien Coro and Rebolar then left Earth peacefully, while eating some of the donuts he received from the kids. 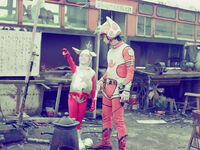 Alien Coro and Gen
Community content is available under CC-BY-SA unless otherwise noted.