"For example humanity, they are more of insects from our perspective."

None
Alien Cool (クール星人 Kūru Seijin) was the first alien that appeared in the series, Ultraseven. Alien Cool collects human specimens using a vaporizing and teleportation ray from his invisible flying saucer. He commenced attacks on an industrial area; all a part of an attempt to cause the TDF (Terrestrial Defense Force) to submit into unconditional surrender.

For the past few weeks, reports of people mysteriously disappearing became a major concern. The Self-Defense Force had the UG on the job, a special agency designed to stop alien attacks. While two members were sent to investigate if something would happen in a nearby forest, a drifter by the name of Dan Moroboshi made himself known and proved to be a bit of a nuisance. Dan warned the Ultra Guard that they were in danger, but no one believed him until a police car that was driving ahead of them disappeared. After being shot at and returning to their base, the Ultra Guard concluded it was the work of an invisible alien. Alien Cool hijacked the televisions and made the Ultra Guard watch as his invisible ship destroyed an entire oil refinery district and would soon attack Tokyo. Dan came up with the idea for a special spray paint and it worked once the Ultra Guard took flight. Cool flew his ship to a nearby canyon after it was hit. After he was forced to land, he summoned five miniature saucers which flew out to menace Earth. Suddenly, Dan summoned a capsule monster by the name Windom. Windom destroyed two of them, but was quickly called back, with Dan Moroboshi then changing into Ultraseven. Ultraseven infiltrated Cool's saucer, used the Emerium Beam on the controls, sliced Cool in half with the Eye Slugger, and freed the missing people he was holding for experimentation. Once Ultraseven took the saucer to space and destroyed it with the Emerium Beam, Dan became the latest member of the Ultra Guard. 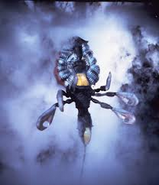 The aliens abduct a man 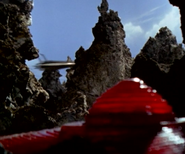 Figure of Alien Cool, by Yamanaya. 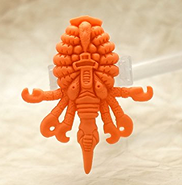