Ultraman Leo episode 25 "The Rhinoceros Beetle is a Space Invader"

None
Alien Clean (クリーン星人 Kurīn Seijin) was an alien from the planet Clean. They first appeared in Ultraman Leo episode 25.

Planet Clean was beautiful planet until an experimental rocket CS137 sent from Planet Earth accidentally crashed into the planet. As retaliation they sent one of their kind and their Satan Beetle to destroy Earth. The Alien Clean tricked a small boy who had sense of aversion to environmental pollution into thinking that the Satan Beetle was a hero to the environment to use him as a shield against Earth's defense force, MAC. After unleashing Satan Beetle Alien Clean revealed his plan of Earth invasion to the boy and left him die with the rest of planet Earth. However, Satan Beetle was destroyed by Ultraman Leo. It is unknown what happened to the Alien Clean after this. 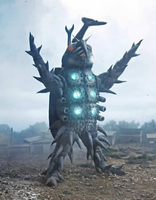 Satan Beetle
Add a photo to this gallery 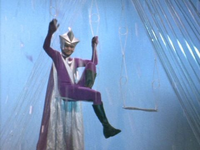 Alien Clean's concept art
Add a photo to this gallery
Retrieved from "https://ultra.fandom.com/wiki/Alien_Clean?oldid=531522"
Community content is available under CC-BY-SA unless otherwise noted.