None
Alien Chadabin (チャダビン星人 Chadabin Seijin) was an alien that appeared in the TV series, Ultraman Dyna.

Under the assumption that Earth was uninhabited, a scout member of the race was sent to test a new bomb. One day, a fisherman walked up to him while planting the bomb and ran away in fright. The human accidentally crashed into the alien's ship, destroying the craft and killing the man. When the fisherman's wife and daughter came looking for him, the Chadabin had no choice but to abandon his body and possess the man's dead one. For some time he had lived the life of a businessman until he saw Super GUTS fighting Mogedon on a television. Upon coming to the scene he told Super GUTS Mogedon's pressure point in his neck, knocking him out. Chadabin told Super GUTS his story upon being interrogated at the site and said that Mogedon swallowed the alien's bomb and that it was still in his throat. The bomb needed to be retrieved or its explosion could destroy the whole planet. As the device was being retrieved, Mogedon woke up. The retrieval team had no choice but to disarm it, however, Mogedon's activities prevented the job from getting done. After Mogedon sneezed out the team and device, Dyna sent him into outer space. The Alien Chadabin then lived the rest of his days on Earth happily. 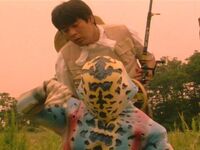 Add a photo to this gallery
Retrieved from "https://ultra.fandom.com/wiki/Alien_Chadabin?oldid=509976"
Community content is available under CC-BY-SA unless otherwise noted.