Return of Ultraman episode 44 "To the Starry Sky with Love"

Alien Centaurus (ケンタウルス星人 Kentaurusu Seijin) are a race of aliens from Planet Centaurus that debuted in episode 44 of the TV series, Return of Ultraman. A single member appeared with her Kaiju, Granadas, but after their encounter with Ultraman Jack, the alien destroyed herself and her monster.

Alien Centaurus originally came to Earth with her monster, Granadas, to destroy MAT Member Kishida's radar which would render Earth blind. However Alien Centaurus saw the Earth people positively and ended up dating Kishida. However the other Centaurus Aliens that sent her constantly forced her to send Granadas and was forced to break up with Kishida. Grenadas fought with Ultraman Jack for a while but began to burn him with its flames. After Centaurus meets with Hedeki Go, Centaurus tells Kishida her backstory and says the only way to kill Granadas is to have her kill herself. She says goodbye to Kishida and reveals her true self and charged her own monster. She tackled it and together they fell, falling off a cliff where Centaurus self-destructed, killing both alien and Kaiju in a huge explosion.

At some point in time, Desastro encountered Ultraman X on Planet Centaurus, the alien's home world. The Kaiju then destroyed the planet as part of its mission, leaving the race without a home.

In episode 87, Alien Centaurus started her fight with Redman by narrowly dodging the explosions caused by the hero's Red Arrow. Even though at one point she managed to prevent herself from getting killed by the latter's Red Knife, the alien had the disadvantage against the hero due to the hero's agility and combat prowess. Despite this, she managed to hold her own against him. The alien was eventually killed by a Red Kick to the face by Redman himself. 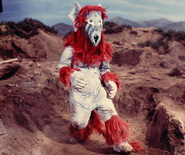 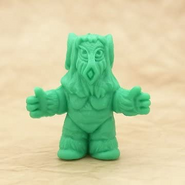