"Although there is no power, there is wisdom. That fool Leo. I will wipe him off the face of the Earth - It's serving time!"

―Alien Bunyo, Terror of the Saucer Race Series - The Life of Leo! The Miracle of King!

Ultraman Leo episode 50 "Terror of the Saucer Race Series - The Life of Leo! The Miracle of King!"

After the destruction of Nova, Black Directive hired a saucer Kaiju that had a mind of his own, Bunyo came to Earth, taking a human form on instantly. While he acted incompetent, the alien would prove to be one of the deadliest foes Leo would ever face. Bunyo was quick to go into action, sensing Gen, Ultraman Leo's human form coming. He jumped off the road and acted hurt, when Gen came along and tried to help, the mercenary tried to attack him, only to find Gen a powerful fighter but still proved the martial artist's equal in hand-to-hand combat. However, one of Gen's human friends came up along and Bunyo took the opportunity to flee, and plan. Despite his bizarre personality, Bunyo was a cunning mastermind and well prepared to lure Leo into a trap, tricking one of his human friends into walking into meeting him in an abandoned hospital, finding him seemingly hurt. Once again he took advantage of someone's compassion to trap them. He used devices in the house Gen was staying in to alert him to his friend's plight, threatening to kill her, knowing Gen would come to the rescue. Bunyo was ready when Gen entered the room, revealing to the hero he knew who he was. He used his hostage to make Gen let him tie the hero up with his space rope, then prepared to take the Ultra in human form to Black for his payment. Finally, Gen came face to face with Black Directive and Bunyo revealed to the vile alien that he had finally captured Ultraman Leo. Before his payment could be collected, Black demanded to execute his nemesis personality, drawing his sword but Gen transformed into Ultraman Leo, breaking Black's sword in half. Unfortunately, the space rope held, allowing Bunyo to hold the hero. Black and Bunyo contemplated how to dispose of the hero as Bunyo once again brought him before the tyrant after beating him down. It was decided to freeze Leo, his timer swiftly beginning to blink as Black prepared another blade to execute the hero. Watching over this, Bunyo decided it was time to reveal his true self and shed his human guise.

Bunyo laughed as he took on his true form and began a rampage he very much enjoyed, destroying everything in his path with Leo dead and MAC long since destroyed, nothing could stop the vile mercenary and it seemed all hope was lost. But in the grave were the murdered Leo was, Ultraman King appeared. King would not allow the forces of evil to be victorious or the brave warrior to be killed in such a way and used his power to reunite Leo's body and bring the hero back to life. Much to Bunyo's shock, he was attacked by the resurrected and vengeful Leo in the midst of his terrible rampage. Black cried out in rage and ordered Bunyo to return the hero to the grave. The two titans battled once more but Bunyo still proved to be a powerful and cunning foe. After tripping Leo up with his ink, Bunyo proceeded to sling the hero around with his tongue. But when it seemed Bunyo would succeed in defeating Leo yet again, Leo fired the Ultra Shooting Beam, striking the mercenary in the head. Though wounded and bleeding badly from his head, Bunyo refused to retreat and continued to fight on, but Leo still had the upper hand and pummeled the alien around like a rag doll. Finally, Leo hit Bunyo right in the face with the Leo Kick, knocking his head clear off his shoulders, giving him a warrior's death. Black Directive could only watch as Bunyo's body collapsed to the ground and melted into slime. Enraged, the vile alien finally pulled out his trump card, Black End. 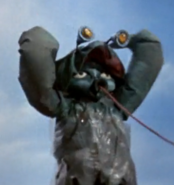 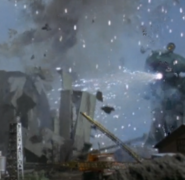 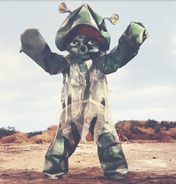 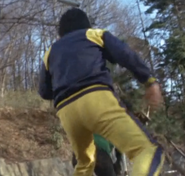 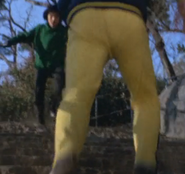 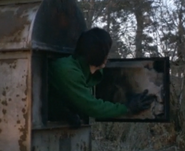 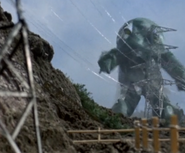 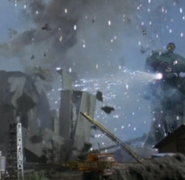 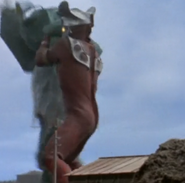 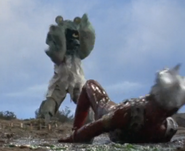 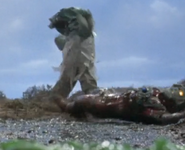 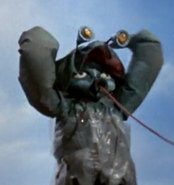 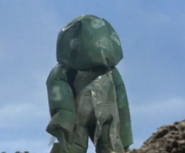 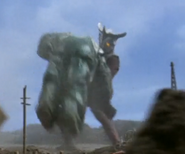