ULTRAMAN (2011 manga) Chapter 20
ULTRAMAN (2019 anime) episode 6 "The Curse That Is Ultraman"
Alien Bris (ブリス星人 Burisu Seijin) is an alien assassin that attacked Yosuke Endo and Kurata. He was Moroboshi's first opponent as Seven.

An assassin sent to kill Yosuke Endo and Kurata after they had set a trap for the alien serial killer both they and the SSSP were investigating. When the policemen's firearms proved useless against it exoskeleton they were saved by the arrival of Moroboshi who battled the alien. In the end, after getting his arm chopped off, Alien Bris was killed by Moroboshi.

It was later revealed by Adad, that Alien Bris was merely hired to commit the murders by another party.

Bris was a serial killer and a hitman hired by a third party, whose objective was to kill anyone who badmouthed Rena Sayama over the Internet. His method of killing perplexed policemen Endo and Kurata, who were investigating the cases, since the victims were reduced to nothing but a bloody splatter on the wall.

Endo and Kurata suspected Alien Igaru of committing the murders since he was spotted peeping at them at one of the crime scenes, but later fled. They started to notice the pattern behind the killings and decided to lay a trap for him in an abandoned flat, where they were unknowingly being observed by Dan Moroboshi. Unfortunately for the cops, Alien Bris arrived instead, and their guns were useless against the alien. They had to be rescued by Dan Moroboshi wearing the Seven suit, who engaged in a short battle with Bris. Bris was overwhelmed and had his left arm cut off by Dan, and started to plead for his life. Dan did not spare him and killed the alien without a second thought. The Curse That Is Ultraman 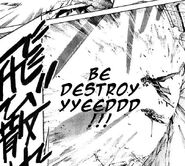 Bris killing a man in the anime adaptation