None
Alien Braco (ブラコ星人 Burako Seijin) are an alien race from the planet Braco. They first appeared in Ultraseven episode 22.

Anne was at her friend's birthday party. Her friend's dog was barking then stopped, so they went out to look for the dog, but her friend Yuriko got hit by Alien Braco. Anne reports this to Captain Kiriyama and says that it also happened in many other places, and they will investigate the disease. Anne takes care of her friend's body, then Alien Braco hits her, and Anne got the disease. While in the medic room, a Braco agent attacks, but is defeated by Dan. It was too late and Anne and Yuriko are in critical condition. It was revealed that the aliens like to put red patches on them to turn female chromosomes into a food source. It doesn't work on males because theirs do not react the same way. The aliens finally come out hiding deep below the ocean and attack. The Ultra Guard dispatches to stop them. Dan finds out the only way to save the two women is to get an element that is not found on Earth, but on Saturn. Dan mobilizes in his ship, but does a kamikaze attack in order to transform into Ultraseven. However, the aliens attack Ultraseven with their entire fleet. The Ultra Guard free him and Ultraseven flies off to Saturn, while they deal with the fleet. Finally, the Saturn alloy is treated to the two women and they are cured.

A Marmit of Alien Braco 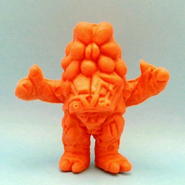