Alien Black came to turn Earth into his slave planey and released his Bio Weapon: Snowgon. As MAT attacked, Snowgon (in her Snow Woman form) froze the members of MAT. She also froze Go, but he managed to shoot her. This prompts Alien Black to summon Snowgon in her true gigantic monstrous form as well as Go transforming in Ultraman Jack. After a deadly battle, Jack used his Ultra Bracelet, which transformed in a shield, and destroyed Snowgon. But before Alien Black can do anything to escape, Jack fired a Palm Fireball and destroyed the alien in a fiery explosion. Winter of Horror Series - Phantom Snow Woman 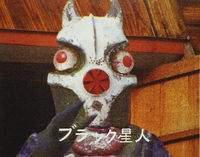