Stage show(s)
Alien Bira (ビラ星人 Bira Seijin), also known as Alien Villa, was an alien race from the planet Bira that appeared in the TV series, Ultraseven. One of them appeared in episode 5.

Alien Bira's motif is based on ibacus, a species of slipper lobster traditionally fished off the coast of Nagasaki.

On the way to the UG's base a high ranking official, Dr. Yushima, was carrying a new pair of gadgets that would help amplify the Ultra Guard's range of detection. Little did he know that his jet escort was paused in time by Alien Bira. That night while he was being kept guard by the Ultra Guard, Alien Bira used the television screen to persuade the official to sabotage the Ultra Guard from the inside out with limited possession of him and sabotage the gadgets. This would prove effective as the radar dish's controls inside the base were set aflame that morning, allowing the official a perfect distraction to receive more orders. Dan saw this and tackled the official, but was placed in a holding cell due to lack of evidence. Suddenly, Alien Bira summoned his section ships to invade as the official tried to sabotage one of the Ultra Guard's fighters, but Dan managed to turn into Ultraseven, escaped the cell, and stopped him with the Emerium Beam, knocking him out and preventing any sabotage. The Ultra Guard and Ultraseven began firing their lasers and Emerium Beam, respectively, until the middle section ship section crashed and forced Alien Bira to grow and fight Ultraseven. While he was able to land a few hits and dodge Ultraseven's Paralyze Beam, it was not enough to save Alien Bira as the Eye Slugger severed him from his tail and was set aflame from his last section ship falling on him.

Figure of Alien Bira, by Bandai. 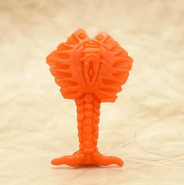 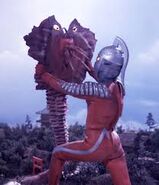 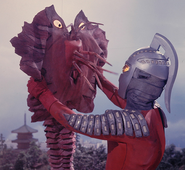 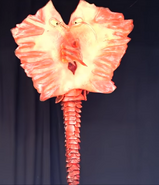 Bira appearing in a stage show for the first time