None
Alien Bell (ベル星人 Beru Seijin) are a race of alien creatures from Planet Bell that appeared in Ultraseven. He traps people in an alternate dimension called Dimension X, where he chases them or sends monsters of his creation after them for his own amusement.

Alien Bell's motif is that of a cricket.

The Ultra Guard were training skydiving maneuvers one day, Amagi and Soga became were the last ones to jump due to Amagi being scared because he was high in the air and needed Soga to push him off. After a long time the rest of the Ultra Guard started to wonder were Amagi and Soga were, and the pilots of the plane didn't know anything about their location.

Back with Amagi, he woke up still in his parachute hanging in trees. After he freed himself he quickly found Soga's parachute with a warning on it, Amagi was confronted by the giant Alien Bell who left after Amagi shot him. Amagi then quickly reunited with Soga. They were then attacked by monsters created by Bell which were easily defeated but were then attacked by the man seized Gumonga who was seemingly killed.

Not long after the Ultra Guard received a call from Amagi and Soga stating they were on a floating island in earth's atmosphere. The Ultra Guard sent a rescue party at once and found Alien Bell's "Dimension X". Not long after they found the bizarre world, they found Amagi and Soga still under attack by Gumonga, some Suflans, and space plants. Dan Moroboshi kept Gumonga busy while cap Kiriyama and Anne would pull Soga and Amagi away from the space plants. When returning to the ship, Alien Bell would reappear and make a sonic sound so high everyone but Dan was knocked out. Dan then transformed into Seven. At first Alien Bell had the upper hand but Seven quickly overcame this and forced Alien Bell to fly away. Seven gave chase and would continuously try to bring Bell back in to the Space X but every attempt failed. Seven then blasted Bell out the sky. Bell then landed in the polluted waters he made for Space X. Ultraseven and Bell continued to battle with Bell losing. Ultraseven finally threw Bell into deeper water were he started to dissolve. Seven then turned back into Dan and reunited with the others and escaped the dissolving Dimension X. 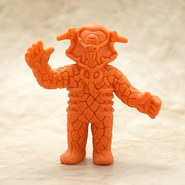 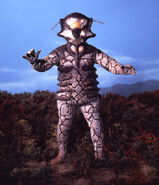 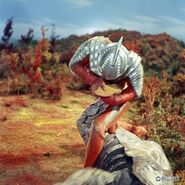 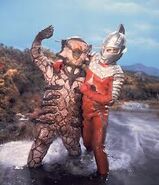