Ultra Galaxy Fight: The Absolute Conspiracy Chapter 3: "The Appearance"
Alien Bat (バット星人 Batto Seijin) are an alien race that debuted in Return of Ultraman. The first Alien Bat was aiming to conquer both Earth and the Land of Light, and a second one appeared in the Future Earth World, controlling Hyper Zetton. Since then, numerous Alien Bat bearing a resemblance to the second have appeared over the course of the remainder of the Heisei era and recent Reiwa era instalments of the Ultraman Series.

After its citizens learnt of the Life Solidification Device created by Hikari, Planet Bat was the stage for a civil war, with the Planet Bat Federal Army eventually emerging the victor. Enraged that the Ultras refused to share this technology, the Alien Bat branded them as "traitors" and launched the Ultra Annihilation Project. Before the Alien Bat who would go on to fight Jack arrived on Earth, Zoffy had been sent to stop the alien. The two battled each other for an unknown amount of time. Eventually, the fight climaxed in Zoffy's near death and retreat, allowing the malicious being to continue his conquest uninterrupted.

The final alien to attack Earth during Ultraman Jack's time, Alien Bat knew he would have to deal with the Ultra in his conquest of the universe, and to protect himself, he brought Zetton Ⅱ along. Bat's choice of Zetton Ⅱ as his invasion monster was no coincidence, as he was aware that Zetton Ⅱ's species was spoken of with a great degree of infamy on the Land of Light, owing to the fact that the original had brought down and very nearly killed Ultraman, resulting in the monster's species being especially feared. In order to prepare his invasion, Alien Bat kidnapped Rumiko and Jiro Sakata whom were close to Go. He trapped the two inside a baseball stadium and psychologically tortured Go with nightmares of the original Zetton defeating Ultraman, exacerbating Ultraman Jack's phobia of the monster.

Alien Bat soon led Go to the stadium, confronting him and showing him his hostages. As Jack was approaching them, Bat's Zetton began attacking Japan. Go tried to transform, but Jack's fear of Zetton's legacy refused to allow Go to transform. To further mock Jack's cowardice, Bat ordered Zetton Ⅱ to destroy the city he was in, as well as MAT's home base, leaving them both completely destroyed. With their base destroyed, MAT had no choice but to attempt a backup plan by repairing Go's MAT Arrow No. 1, as all the other jets were written off with the destruction of the base.

MAT attacked Bat in his lair, causing the invader to grow into a giant size to join Zetton Ⅱ in his attack. Bat tried to help the fight, but he was forced back by now provoked Ultraman Jack. As Zetton Ⅱ overpowered the Ultra, Bat clipped Jack's knees knocking the Ultra down. Bat and his monster proceeded to tag-team Jack, pummelling him relentlessly. But, Jack managed to use the Ultra Cross after getting an opening in the fight to get back to his feet, impaling Bat through the chest. Mortally wounded, Bat uttered one last sound before toppling over, dead. With Bat no more, Jack could focus his attention on Zetton Ⅱ. The 5 Ultra Oaths

As part of his plot to reinitiate the Ultra Annihilation Project against the Ultra Brothers, a different Alien Bat had been grave-robbing various monsters from the Monster Graveyard. When Ultraman Zero was sent to investigate, Bat unleashed the revived Zetton against Zero and retracted the monster away to replace it with a modified Birdon. To make matters worse, an Anti Ultra Field was placed to weaken Zero, until Zoffy provided the Ultra Converter and the two combine their attacks to destroy Birdon quickly.

An Alien Bat is the major antagonist of the 2012 film Ultraman Saga. After bringing destruction to a universe and indirectly lead to Beatstar's creation, the Alien Bat aims to achieve godhood by creating the strongest Zetton, using a particular planet Earth as his testing site. He was defeated by the titular Ultra of the movie.

In the miniseries, Ultra Zero Fight, another Alien Bat, who was a relative to the one from Ultraman Saga, appeared. This Alien Bat was named Gurashie (グラシエ, Gurashielit. Glacier).

Gurashie traveled to the Monster Graveyard and revived Telesdon, Gudon, Sadola, and Bemular. Ultraman Zero easily defeated the first wave, thanks to his recently acquired ability to change forms. Alien Bat Gurashie then unleashed four more powerful monsters: Red King, Gan-Q, Galberos and Bemstar, whom will be given the title "The Four Beast Warriors of Hell". When Zero jumped to clash with the monsters, Bat shot a beam that trapped Zero in a Tector Gear made from the restless souls of the monsters he defeated, severely hampering his fighting ability. Gurashie made his Red King evolve into its EX form, who beat Zero with its powerful arms. Zero tried to gather himself, but Gurashie triggered the Tector Gear into electrocuting Zero, and EX Red King knocked him unconscious. Later, Zero was able to defeat EX Red King, but was sent into a dimension where he was forced to fight himself by Galberos.

After that, Zero defeated Gan-Q and Bemstar. However, the souls of the four dead monsters would be absorbed by Gurashie in order to allow him to transform into his giant sized form. Although the battle began in the Ultra's favor, Gurashie had managed to overpower Ultraman Zero by revealing his friend Pigmon was part of his experiments to revive dead monsters. If Gurashie died, so to would Pigmon. Unable to focus, Zero was at the alien's nonexistent mercy but survived when he managed to split apart into Strong-Corona and Luna-Miracle forms and manage to turn the tables. Luna-Miracle Zero then use a purifying technique to free the trapped monster spirits inside Gurashie, the then purified souls left Gurashie's body peacefully. With the loss of his power Gurashie became infuriated which gave Strong-Corona Zero the chance to grab him and use the Ultra Hurricane to throw him into the air where the same technique held him in place as Strong-Corona finished of Gurashie with the Garnate Buster as Luna-Miracle Zero saved Pigmon from being destroyed with Alien Bat.

An Alien Bat takes on a human form named Seiji Komori (小森セイジ Komori Seiji).[1] He lived among humans in a quiet community with his partner, Alien Pitt Hitomi Mizuno, but grew tired of the oppression and taboo of aliens living with humans. At some point, they were approached by Kirisaki, who gave Komori a device that can summon Zetton. Tempted by this, Komori began to plot an invasion on Earth, much to Hitomi's dismay. He gets in contact with Alien Hook, who had unleashed Bemular in the city. Komori desired to create a new world where aliens are free to live.

One day, Komori was getting roughed up by a gang, but Homare Soya helped him out. Going back to his house, Komori, Hitomi and Homare got to know each other. While visiting them later on, Homare overheard Komori's conversation with the Hook. He temporarily knocks out Homare and unleashes Zetton. After a brief exchange of words with Homare and Hiroyuki Kudo, they fight after Komori fails to convince him to join his side against the humans. He binds Hiroyuki and commands Zetton to destroy him with a fireball, but he is saved by the light of Ultraman Taiga. During Taiga's fight with Zetton, Homare beats Komori, who had resorted to transforming. He is spared when Hitomi arrives.

After the battle with Zetton, Homare visits the couple once more. They are revealed to be resuming their peaceful way of life. For the New World

After his death at the climax of Ultraman Saga's fight with Hyper Zetton, Alien Bat was revived by Reibatos on the order of Absolute Tartarus, who recruited the alien into The Kingdom.

Alien Bat's first appearance in the show was in episode 121 where he teamed up with Alien Icarus to battle Redman. Alien Bat already had the advantage over the alien hero with his sheer ferocity and strength and things were already made worse for the latter when Icarus showed up to help him. While he did try to hold his own against them, Redman was no match for the two aliens as they countered anything he threw at them. After he summoned his Red Knife and prevented Icarus from using it on him, the alien hero finally fought back and defeated Alien Bat with a hard double kick to the face and Icarus would soon follow afterwards.

Alien Bat reappeared in episode 123, where he teamed up with Draculas to battle Redman. While his partner was dealing with Redman with ease, Alien Bat showed up to give him a helping hand after he knocked away the alien hero's Red Knife. Even though the alien hero managed to hold his own against both monsters, they still had the upper hand against him. Nonetheless, Redman didn't give up and with his reclaimed Red Knife, he killed Alien Bat by stabbing him, and Draculas soon followed.

In episode 126, Alien Bat teamed up with Beacon and Sadola to battle Redman. The three monsters duked it out with the alien hero at the cliffs and the advantage over him due to their brute force and overwhelming teamwork. All four of them then got into a ditch and climbed back out eventually to continue the fight. During that time, Redman managed to hold his own against all three monsters and eventually he defeated them all by firing a Red Shot from his Red Knife.

Alien Bat made his final appearance on the show in episode 127, where he teamed up with Beacon and Sadora once more to battle Redman. They started their fight on top of a hill but then Redman sent them tumbling down and they resumed their fight at the bottom. Even though the monsters had the team advantage against him, the alien hero managed to hold his own against the trio much better than last time with his usual moveset and successfully defeated the three monsters by jumping up to the top of the hill and threw his Red Arrow at the monsters and they got knocked out by the explosion from that said weapon. 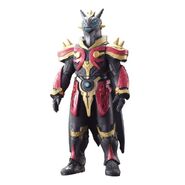 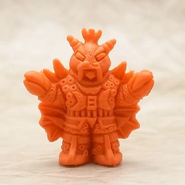 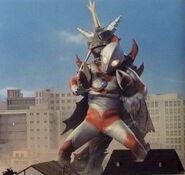 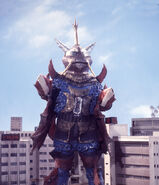 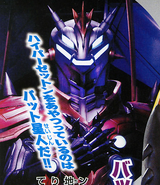 Alien Bat hanging upside down from a beam in his spaceship, imitating bats on Earth

Gurashie being defeated by two Zeroes

Seiji revealed his plan to Homare

Alien Bat and Zetton VS Homare Soya and Ultraman Taiga

Behind the scenes: Shintaro voicing Gurashie

The original Alien Bat suit in a public outing. 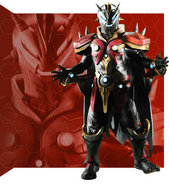