"To steal all the treasures in the galaxy! That is our code!"

Ultraman Trigger: New Generation Tiga episode 7 "Inter Universe"
Alien Barossa (バロッサ星人 Barossa Seijin)[1] are pirate aliens that debuted in Ultraman Z. Known for their lifecycle, which involves emerging in giant broods numbering in the thousands, the Barossa are also known for their use of weapons stolen from other aliens and monsters. Three Barossa, a trio of brothers from the same brood, attempted to attack the Earth; the first two were defeated by Z, while the third met his end at the end of a combination attack carried out by King Joe SC, Sevenger and the Beliarok.

Their name is likely derived from the Barbarossa brothers, a pair of notorious Turkish pirates who operated off the coast of North Africa during the fifteenth century.

Alien Barossa was designed by artist Kengo Kusunoki under the image of an alien that will represent the Reiwa Era of Japan.[2] True to form, Barossa is the first new alien race in the Reiwa Era of Ultraman Series to be given a suit.

Alien Barossa are a race of pirate aliens that are notorious for looting the weapons of their opponents, this includes a King Joe unit from Alien Pedan. Alien Barossa Special Airborne Armor Secret File

Aiming for the scattered Ultra Medals on Earth, a Barossa piloted King Joe to ambush a GAF facility to steal three medals they obtained and threaten the organization to hand over the other three in their possession. STORAGE took the mission to protect them by acting as diversions while Yoko delivered the real set to JAERC. Meanwhile Barossa was leaving thinking it had the real ones. Unfortunately for STORAGE alike, neither managed to accomplish their task as Shinya Kaburagi was there to steal them from Yoko and lured Barossa/King Joe to his location by opening the special container. Just as King Joe was about to capture the Medals, Z obtain them first and ultimately used them to disable the robot. The Unidentified Object Convoy Order

Barossa survives long enough to manipulate a STORAGE officer to break into their headquarters to reclaim King Joe. Using Yoko as a hostage, he forces Yuka to reactivate the robot before Juggler prevented him from killing Yuka. Barossa made his way to the hangar by incapacitating Kojiro Inaba's men and electrocuted as soon as he was fooled by a lunchbox. The alien escaped the building by accidentally leaving his looted Ultra Medals behind and grows large to fight Ultraman Z using all of his looted weapons. Yoko gave Barossa's stolen Medals to Z, who uses it to initiate M78 Style Shining Tornado Slash. In his final breath, Barossa proclaims that his other 9,999 younger brothers shall avenge him. Here Comes the Space Pirate!

Sometime later, true to the first Barossa's proclamation, one of his younger brothers, Alien Barossa II (バロッサ星人（二代目） Barossa Seijin Nidaime)[1] appeared from the sky and ambushed Z in Delta Rise Claw, who had just slain Metsuboros. The Lion's Cry In addition to taking the discarded Gillvalis hand from Metsuboros' remains, Barossa II intended to collect the Beliarok as part of his space treasure collection and get his revenge on Ultraman Z for killing his older brother.

Beliarok seemingly complied and allowed Barossa II to use him, but decided to refuse midway through the fight after seeing the sloppiness behind Barossa's attacks. Returning to human size, Barossa II found himself in a three-way confrontation between Haruki and Juggler for Beliarok's possession. Again, he briefly obtained the Beliarok, but the sword decided to choose Juggler instead as his wielder. Wanting to continue with avenging his older brother, Barossa II swallowed Juran seeds to enlarge and faces against Z and Windom. He was able to use Yoko/Windom as his hostage for a brief moment, but the Beliarok returned to Z to turn the tables. Seeing how the battle went to his disadvantage, Barossa II attempted to flee, but was killed by Deathcium Fang. Beliarok

Some time after Barossa II's invasion attempt failed, a third Barossa arrived on Earth to launch an attack in the aftermath of the D4 incident. This Alien Barossa was the elder brother of Barossa II, and the younger brother of Barossa I, making him the 'middle child' of the three. Wanting to avenge his brothers, Barossa III teamed up with Jugglus Juggler, who sided with Barossa for unknown reasons, fighting alongside the Majin and his Tri-King (and later, Five King) transformation against Z, Sevenger and King Joe STORAGE Custom in a long battle. Eventually, the Space Pirate met his end by Sevenger's improvised Sevenger Wave Riding Special Slash combination attack with King Joe's Leg Carrier and the Beliarok. Individual Tomorrows

This particular individual, like the first appearing Barossa, is incapable of speaking in human languages, hence he had a Baby Zandrias as his interpreter. After stealing King Joe STORAGE Custom, he tried to stall his pursuers, Ultraman Z and Yoko/Space Sevenger by throwing random junks before he uses Bullton to cover his escape. Unfortunately Z managed to slip in at the cost of losing his medals and damaging his Z Riser. Bullton lead its passengers (including King Joe SC) to the world of Ultraman Trigger.

While searching for his last Juran seed in order to grow big and left Earth, Ignis barged in to steal the Ultra Medals, leading to a skirmish chase. He managed to recover the Juran seed and grows large to attack Ignis, but his actions attracted the attention of GUTS-Select and Ultraman Trigger. With the addition to Ultraman Z during their fight, Barossa try to make his escape, but was quickly killed mid-air via Beliarok and Power Claw, exploding into pieces. Inter Universe 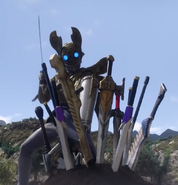 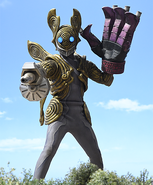