None
Alien Banda (バンダ星人 Banda Seijin) were the creators and masters of Crazygon which was mentioned in Ultraseven episode 38.

They needed more resources such as machinery for their planet so they sent their robot to get more from Earth. However, the UG opposed their creation and after several attempts to destroy it from the outside, they set bombs into cars. When Crazygon came to eat them, the cars exploded inside their base taking them with it. With no one to control it, Crazygon went on rampage, trying to destroy everything until it was brought down by the combined might of the Ultra Guard and Ultraseven. 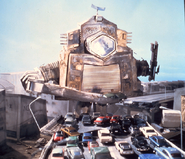