None
Alien Bam (バム星人 Bamu Seijin) are aliens from the planet Bam that first appeared in episode 5 of Ultraman 80.

The first step of their plan was capturing Takeshi Yamato, the human form of Ultraman 80 and current defender of Earth to ensure he could not interfere with their plans. It was successful, having brought him into the 4th Dimension on an inter-dimensional train.

In the manga version of Ultraman 80, the Alien Bam reappeared in a sequel story where they start a more full-on invasion of Earth, taking a kid hostage and bringing forth a new Mechagiras No.2 capable of separating into three parts similar to another robot. Despite their new improvements, UGM manages to reseal the 4th Dimension while 80 destroys Mechagiras No.2 with a combination of Ultra Boomerangs and Succium Beam. 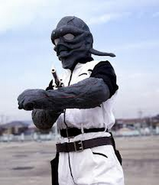 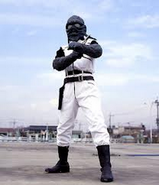