"This is the Emperor of the Universe, Alien Bado. I have been here once before to your galaxy. But back then Planet Earth was just a ball of fire. There were no living beings in your galaxy, except on Pluto. However, we annihilated them, because no other beings other than us should be in this galaxy. As this is the case... Of course, Earth is next."

Ultraman Taiga The Movie: New Generation Climax
Alien Bado (バド星人 Bado Seijin) are an alien race from the planet Bado, that first appeared in episode 19 of the TV series Ultraseven.

According to Alien Bado, his people visited Earth's solar system, back when Earth was still forming. They wiped out the only form of life in the system at the time, on Pluto. They did this because they believed that no other form of life should exist besides their species.

Alien Bado was an alien who referred to himself as "The Emperor of Space." He planned on destroying the Earth with his fleet of soldiers and their spacecrafts. However, Bado's comrades were unable to reach the Earth's surface thanks to an orbital energy barrier surrounding it known as "Project Blue," created by Dr. Miyabe of the Ultra Guard, forcing Bado to launch his invasion attempt alone. Angered by Miyabe's creation, Alien Bado invaded the scientist's summer house and transformed it into a ship, where he tormented Dr. Miyabe as Bado searched for the blueprints to Project Blue. Once the Ultra Guard found out about Bado's infiltration, they soon arrived on the scene to investigate what was happening, but before they could find any leads, Bado emerged and began menacing the UG, alongside Dr. Miyabe's wife, with his pistol. During the commotion, Dan transformed into Ultraseven to stop Alien Bado himself, but the alien noticed Ultraseven's presence and so tried to escape Earth with his prisoners. Luckily, Ultraseven grew into his giant size and was able to crash the ship out of the Earth’s atmosphere. However, Bado wasn’t finished yet and he morphed into a giant form to battle Ultraseven as well, grappling and throwing rocks at him before resorting to his spiked knuckle-duster-like weapon. Eventually once an opening was found, Ultraseven hit Bado with one strong punch in the face, knocking Bado into the air and on top of Ultraseven, who then held him up high and slammed him back onto the ground on his head, paralysing and mortally injuring the alien. After coughing up blood, Bado breathed his last.

Alien Bado was a sniper hired by Kei Fukuide to kill Laiha Toba, but ended up being killed by flying debris during Geed's battle with Pedanium Zetton. The Geed Identity

Alien Bado was among the aliens interviewed by Alien Mefilas and Alien Zarab on Saki Mitsurugi's plan to turn Earth into a bomb. More members of their species also appeared for minor comedic moments, and had a civil war over one of Ushio Minato's shirts. A World Without Tomorrow

A hitman named El-Ray (エル・レイ Eru Rei)[1] was hired by Alien Zetton Zolin of the Villain Guild to assassinate Professor Sachiko Motomiya, who was creating a device that could distinguish aliens from humans. Just as he was about to snipe at her, Mystie appeared and pushed Sachiko out of the way before taking her elsewhere. Hiroyuki Kudo went to fight him, but he called Aribunta from underground to take him away, escaping for now. He went back to Zolin to report to him, but was reprimanded. Later, El-Ray returns, holding Sachiko at gunpoint to corner Mystie. He calls Aribunta again, but it is dealt with by the combined effort of Ultraman Titas and Ultraman Taiga. El-Ray and his subordinate are defeated by Mystie, Homare Soya and Inspector Sakura, who arrests him. Sand Castle

After hearing from Foreign Affairs X that Hiroyuki was being targeted by remnants of the Villain Guild, Kana Sasaki set out to find them in order to protect her employee. She came across them at their hideout and asked them nicely for information, but things took a violent turn as a fight broke out. Fortunately, Kana was joined by Gai Kurenai, who helped her fight off Alien Zelan, Alien Bado and Alien Ckalutch. They interrogated them after their defeat, and found out that they wanted to steal the Ultramen's Bracelets to sell them off and escape the Earth when Grimdo arrived. Ultraman Taiga The Movie: New Generation Climax

Alien Bado are the footsoldiers of the Star of Darkness. During their invasion of earth, scores of the aliens were deployed to combat the SSSP Ultras and their many allies. However, despite their numbers, the Bado were swiftly eliminated by their opponents. 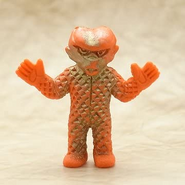 Alien Bado in a stage show