"I was there at the Reionics Battle, and I lost to a Reionics from Earth called Rei. This and that happened, and I became a Reionics drop-out. Once I dreamed of ruling the universe, but now it's all I can do to support Nova."

―RB explaining his backstory to Ribut and Melos.

Isamu Sugaya (NEO)
Tatsuya Hashimoto (GRF)
This Alien Babarue (ババルウ星人 Babarū Seijin) is a Reionics Battler (レイオニクスバトラー Reionikusu Batorā "RB") who originally participated in the fight against his fellow Reionics to obtain Alien Reiblood's title as the ruler of the universe. After his defeat from Rei, Babarue was reduced to a petty thief until he was scouted into the Galaxy Rescue Force by Andro Melos.

Although his original name is unknown, Babarue had since decided to adopt the "RB" designation as his identification to members of GRF.

He is a Reionics who controls the monster Antlar. After taking down the Space Pendragon, he is confronted by Captain Hyuga whom he first identifies as an enemy Reionics. Despite Hyuga's protests, the Babarue unleashes Antlar regardless until Reimon and Gomora arrived on the scene.

Provoking Antlar, Gomora and Antlar battled, each with their owners Reimon and Alien Babarue reeling in pain at the blows each suffer from the monsters' battle. After a long and vicious battle, Gomora transformed into his Reionic Burst form and tore off the beetle's pincers, mortally wounding both Antlar and his master in the process. Not wanting to die, RB recalled Antlar and fled the scene, not to be seen again for a very long time.

While Ai Asama and Kanegon traveled into the past with Vittorio's help, Babarue (RB) ambushed them through the still-injured Antlar dragging Ai into a self-made antlion pit. After Ai killed Antlar with Red King's help, Babarue (RB) was forced to teleport away, just in time when the Reionics Hunter arrived on the scene.

With Rei being emerged as the victor and the threat of Alien Reiblood has long ended, Babarue was reduced to a petty thief who acquired Nova at some point of time, using the Saucer Creature to steal food from citizens of an unnamed planet in order to make ends meet.

His actions were discovered by Galaxy Rescue Force members, Ultraman Ribut and Andro Melos, after reports of thievery on said planet. After the two fought against Nova, Babarue called off his monster for a retreat and revealing himself as the perpetrator of the incident (now addressed as "RB" onwards). After revealing his past to the two heroes, RB was content in resigning himself to his fate but Melos decided to show mercy by offering him a position in Galaxy Rescue Force. Having long discarded his pride as a Reionics and had nothing else to live for, RB took the offer and join their team. Once arriving in their base, Kenis took RB under his wing after the two became fast friends and the former acknowledging his strength and usefulness in combat. 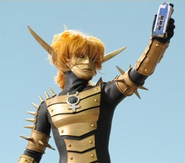 Battlenizer
"Ultraman Ribut"
In the Galaxy Rescue Force Voice Drama, RB took on the form of Ultraman Ribut as a demonstration of his ability to shapeshift into different person.

Babarue (RB) as he appears in the manga.