Ultraman Leo episode 36 "Fly Leo Brothers, Save the Space Base!"

None
Alien Atlanta (アトランタ星人 Atoranta Seijin) was an alien that appeared in episode 36 of the TV series, Ultraman Leo.

Alien Atlanta crashed a stolen rocket, whose occupant he’d taken the form of, into the Earth, pretending to be in mortal danger to get MAC's sympathy and help. However, he ran into a slight problem when those who knew the real man arrived, forcing him to remain quiet, as he didn’t fully know the man he was replicating. He met Gen and shook his hand, sensing the man’s true identity as Ultraman Leo, but Gen also sensed that he wasn't truly the man he was pretending to be. While being allowed to use a MAC aircraft, he used his disable beams to bring down Gen’s plane, attempting to discredit him while stopping him from crashing to earn their trust further, but MAC defended their own. Atlanta continued to live the life of the man whose form he’d taken, including preparing to marry his disguise’s lover. As Dan and Gen tried to find out what to do, they realized they had no choice but to keep the alien away from his ‘fiance’, Dan used his Ultra Willpower and knocked her out and took her to a safer location. Dan confronted the alien, letting him know he was onto him, Gen following him as he left, Dan following by air. After being cornered by Gen, Atlanta then took the opportunity to run Gen down, inadvertently revealing himself as an alien. He knocked out the general he was using against Dan and fought Gen, being overpowered. This forced him to shed his disguise and reveal his true form. Gen quickly followed suit, turning into Ultraman Leo. The alien chased after Dan’s ship, Leo right behind him. He caught Dan’s ship, but Leo caught him and grabbed on. It was then the true nature of what he was doing came to pass, he was attempting to slam Dan’s ship into the MAC HQ.But at the last second, Leo’s brother Astra arrived and saved Dan, allowing Leo to wrap Atlanta up in the Ultra Cape, sending him plummeting to Earth. Atlanta survived the impact, but was forced into battle with Leo. The two exchanged blows but Leo easily began overpowering him, causing the invader to attempt to flee, only for Astra to cut him off. Sandwiched between the Leo Brothers, Atlanta was pummeled back and forth until finally, the Ultra Double Flasher was fired, putting the deceptive alien down once and for all. 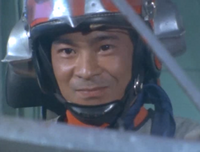 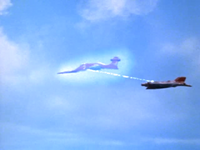 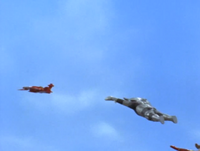 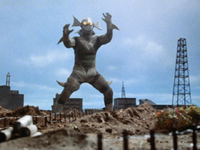 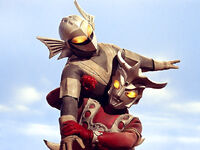