None
Alien Antira (アンチラ星人 Anchira Seijin) was an alien that appeared in Ultraman Ace episode 10.

When the monster Zaigon appeared to devastate the city, Hideki Go suddenly appeared in front of Seiji Hokuto, ignoring Seiji's calls to move out of the way, and fired his weapon at Zaigon, causing it to disappear. As TAC congratulated Go on his efforts, he told them his weapon was called the Ultra Laser. Jiro Sakata was ecastic at seeing his brother figure return, before being gently pulled away as Go was injured during the attack and sent to TAC hospital for recovery.

TAC would then settle into an intense debate of whether to accept Go as a new member, and Seiji is scolded for arguing about how Go's actions prevented him from firing at Zaigon. Afterwards, when Seiji and Yuko visited Go in his room with Jiro and his female companion, Seiji begin to suspect Go when Jiro saw Go handle the chopsticks he had been given to eat the food Jiro gave him in his left hand, when Go is supposed to be right handed.

Just then Zaigon reappeared and Go leapt out of his bed, locking the door and trapping Jiro inside. Hokuto tried to open the door, but Go shot at him, and that was when he revealed his true identiy as Alien Antira. Yuko Minami shot "Go" making him run. Hokuto quickly freed Jiro. Jiro went after the alien, angry that it had disguised itself as his idol, but was taken hostage. Hokuto freed Jiro, and Antira was finally killed by a shot from Hokuto.

A figure of Alien Antira, by Marmit.

Alien Antira in a stage show. 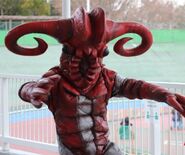