Alien Akumania was one of the most bizarre aliens to ever come to Earth and, like many others during Leo’s time as guardian of Earth, he came to Earth with dreams of conquest or just sheer love of destruction on his mind.

On a normal patrol, MAC came upon strange clouds, from which emerged the eyeball-like Alien Akumania. Not ready to battle the strange creature with their weapons on hand, MAC returned to base to prepare an attack against the alien. They were quick to return with their fighters as Alien Akumania descended on the town. He merely sent a red wave of energy from his eyes and vanished. They found his location again as well, but he did exactly the same thing as before, fired the red wave and disappeared. Not long after that, people who smelled flowers he’d infected with his wave began to have surreal and extremely realistic hallucinations of blue hands reaching out of walls, floors, even cabinets to try to grab them.

Having not been able to find Alien Akumania, Dan and Gen decided to ask locals to keep an eye out for strange happenings. One of the children Gen befriended soon found his mother in a state of shock and was somehow infected himself, suffering the hallucinations as well. Back at base, MAC was still desperate for answers, unable to even locate the space monster. Finally, the hallucinations not only appeared real, they began becoming real. Dan and Gen soon came across a group of people talking about strange events.

When they arrived on the scene, the entire apartment complex was a ghost town and began to warp around then as Gen came to help his friend, only to hear a voice yelling and blocking his entrance. While everyone inside the building were left in a state of complete shock, Gen managed to force his way into one of the apartments. Finding the surreal environment contained inside, he tried to free Alien Akumania’s victims, only to be attacked by the strange hands reaching out from the walls. However, the human form of Ultraman Leo fought back and tore the hand from the floor with sheer determination.

The destruction of the hand shattered the space demon’s hold, prompting him to appear himself, his eye glowing a furious red. Choosing destruction over conquest, the invader opened fire on the city with his organic cannon, laying waste to the surrounding area. Deciding it was time to put an end to the insanity once and for all, took on his true form of Ultraman Leo. Alien Akumania attempted to bash into Leo and attack but was merely launched around. He opened fire with his organic cannon but the hero dodged easily.

Seeing his present form couldn't defeat the hero, Alien Akumania underwent a startling transformation into his demonic monster form, creating a nightmarish realm around them. The terrible alien was quick to unleash his telekinetic powers on the hero as he charged, throwing the hero around like a rag doll. As Alien Akumania clashed his teeth, clearly intending to attempt consuming the hero, Leo managed to pull out the Ultra Cape and bloke the invader’s telekinesis and fight back.

Still the invader proved difficult to fight, physically overpowering him and ramming him repeatedly with his horns. After regaining his footing, Leo used Akumania's horns against him, kicking off one with the Leo Kick, then hurling the broken weapon into Akumania's eye like a javelin, where it easily burst through the alien's eye's surface and became lodged in its center. Screeching in pain, Alien Akumania’s nightmare realm was shattered, bringing them back into the light. Leo pushed forwards and while the terror was still stunned with pain, Leo assaulted the monster and then tore its arms off.

With Akumania apparently defenseless, Leo charged into battle, only to be attacked from behind by the alien's disembodied but still functional arms, capable of moving on their own in spite of their owner's loss of telekinesis. The detached limbs wrapped their hands around Leo’s throat and choked the life out of hero. Unable to break free from their strong grip, Leo collapsed to the ground, seemingly defeated as MAC arrived to try to help him. As Alien Akumania closed in to finish the hero, MAC opened fire, taking the invader off guard and blowing off his remaining horn but unable to kill him. Knowing his brother’s plight, Astra arrived in a ball of energy to aid Leo.

Thinking Leo was out of the fight, Alien Akumania called his arms back and reattached them, ready to battle Astra but Leo managed to recover and stand again. Astra quickly used the Color Timer Flash to stun the alien, knocking him to the ground. The Leo Brothers unleashed their Ultra Double Flasher, killing the invader, causing him to revert to his eye form, his reign of terror ended. After the battle, Astra grabbed up the alien’s body and took it into outer space to be disposed of.

Alien Akumania appeared in the second theater special. He was the fifteenth monster to be Ultlived by the Live Pad and he came along with Gan-Q. Together, they taunted Mochiron and left him scared until Gomora and defeated the two big-eyed monsters by slamming them into each other. Ultraman Ginga Theater Special: Ultra Monster ☆ Hero Battle Royale!

Alien Akumania reappeared in episode 11 of Ultraman Ginga S as an agent of Alien Chibull Exceller, named Muerte (ムエルテ Muerute). He first appeared in his human disguise when he approached a salary-man named Yoshida and transported him to another place. After a brief conversation, the alien used his mind control to get the man to "Monslive" into Gan-Q and succeeded but he appeared the size of a human. Frustrated with this, the alien transformed into his true self after the man refused to give up the Spark Doll.

He chased Gan-Q throughout the city until the UPG showed up and he decided to flee. He was then tasked by Exceller to get Gan-Q back under their control by any means necessary. He reappeared in his human form when Gan-Q was riding a bike with his human friend, a young boy named Satoru and ran into him. After the brute took the young boy hostage and began stomping on his bike, Gan-Q became enraged and grew to his true size and began to rampage throughout the city. Shortly after Hikaru Raido then transformed into Ultraman Ginga, Muerte transformed into his true form and size but was then struck down by an attack from Ultraman Victory's EX Red King Knuckle.

Muerte then placed Gan-Q under his control and, after the latter absorbed a Victorium Burn and fired it back at him, managed to put both Ultras on the ropes until Satoru showed to remind the monster who he really was. The frustrated Muerte tried to destroy the kid, but Gan-Q stepped in front of him, absorbed the attack, and fired it back at him. Gan-Q then held off Muerte until Ultraman Ginga transformed into Ginga Strium and Victory Ultlance the Shepherdon Saber. The vile alien was then defeated by the combined efforts of the saber's slash and Ginga's M87 Beam. Gan-Q was then turned back into a Spark Doll by Ginga's Ginga Comfort but Satoru held onto it as a memo of the great times they had together.

Alien Akumania is a referee to a rugby match participated by Isamu and the Nebula House residents against the Dark Star Cluster gang. When the opposing team used their special abilities, he did not call them out as cheating and looked the other way. We are Nebula!

Leo and Astra vs. Alien Akumania 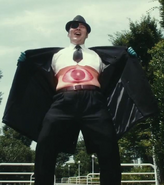 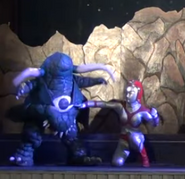 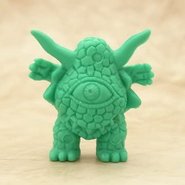