ULTRAMAN (2019 anime) episode 4 "Release the Limiter!"
Alien Adacic (エイダシク星人 Eidashiku Seijin) is the second opponent Shinjiro faced, he proved to be a powerful opponent for him. This alien was a serial killer feeding on several humans.

The people of Adacic were forbidden to live on earth with other aliens, forcing them to sneak in, like the individual that fought Shinjiro, a serial killer. This creature took to feeding on humans, killing them in a gruesome manner. His activities were eventually noticed by the SSSP who sent an extermination team headed by agent Moroboshi. However at the last minute Shinjiro was sent in to kill the monster. The young man entered the alien's domain to see several victims of varying ages and the creature finishing of the latest victim of his murder spree. Unfortunately for Shinjiro, the alien was much more agile than the young Ultraman, knocking him down and belittling him. Eventually the two went at it with Adacic firing his energy blasts and Shinjiro using his Spacium Beam in a fit of rage. Unfortunately the alien dodged the attack and flew through the hole in the roof the beam made with the Ultra Hybrid flying after him.

The continued battle between the two caused the destruction of several buildings and caused the pair to land in the middle of a traffic jam in full view of the public. It was at this time Adacic pointed out several things for the sake of undermining Shinjiro's confidence. He noted that he was done fighting and that he was leaving with the intention of staying out of public view, as it would make hunting easier, Shinjiro on the other hand had forced him and therefore their battle in the public, going against SSSP strategy and endangering civilian lives. As the alien spoke he knew his words were having the effect it desired. However all his efforts were undone by the words of Rena, a pop idol whose car Shinjiro had landed on. The young woman gave Shinjiro back his confidence annoying the alien causing him to fire plasma bombs at her and her agent. Shinjiro defended them with his Spacium Blades and took the famous fighting stance both of his fathers used in combat and declared he was Ultraman.

Adacic laughed at the statement, saying he would be glad to get to kill 'Ultraman'. Then he turned sour as he spoke out loud that someone had manipulated events to set him against Shinjiro. Angry he fired his pincers and threw a volley of plasma bombs at Shinjiro forcing him onto the defensive. Shinjiro was knocked into a building and when the alien saw a red light he believed it was the Color Timer. He was right to a point, the red light symbolized that Shinjiro had removed his limiter. In a flash the alien lost his left arm and saw Shinjiro's glowing form. Angry he jump up into the air and fired at Shinjiro who jumped after him and kick him in the chin knocking him further up and then finished him of with an enhanced Spacium Beam.

Despite his death the alien still left a lingering effect on the SSSP, Shinjiro was forced to deal with the fact that he had killed someone for the first time. Ide's investigation revealed that his victims were tagged on the back of their necks and most were young girls and children. Ide and Ed concluded that there was a criminal organization behind it. They concluded from his disguise that Adacic was unable to 'purchase' these black market goods and hunted the victims himself, hence his disguise. It was also revealed that there were hundreds of victims with barcodes so far making it clear he could not have committed all of those murders.

Alien Adacic was a serial killer who disguised as a security guard to get around, and ate humans as food. Dan Moroboshi and other SSSP members were sent to exterminate it but they ultimately requested for Shinjiro Hayata instead. He walked in on the alien feeding on humans and was left horrified. Being Ultraman Isn't So Bad Shinjiro quickly rushed in to attack, enraged at the sight of so many human corpses. However, Adacic had the upper hand and was nearly untouchable, and mocked Shinjiro for being a "fake Ultraman". Adacic later takes the fight to the city nearby, disrupting traffic as they fought. Adacic temporarily stopped to mock Shinjiro for his incompetence and nearly kills Rena Sayama after she cheers Shinjiro on, and claims to be excited to be the one who would kill Ultraman. Adacic later resumes his attack on Shinjiro, driving him into a corner. With very little options left, Ide released the Ultraman Suit's limiter, pushing Shinjiro's powers to their limits. Taking it as a danger warning instead, Adacic thought he was winning until Shinjiro promptly sliced his left arm off, enraging the alien. Despite going all out trying to kill Shinjiro, Adacic was finally finished off with a Spacium Beam that obliterated him. Release the Limiter! 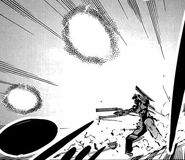 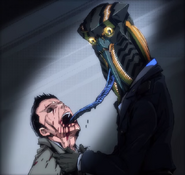 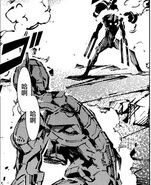