Alguros, like Apatee, is a Metal Organism created by the Radical Destruction Bringer to bring destruction to Earth and humanity, but this time, Alguros was made for another purpose: destroy the "Place of Agul", which also serves as Hiroya Fujimiya's power source. After appearing from space in the form of huge metal spikes, Alguros quickly formed himself and began to proceed to the "place". However, Ultraman Agul appeared to defend his sanctuary, but was quickly outmatched by Alguros due to his shapeshifting abilities. XIG began to attack the metal being, distracting him, while Agul began to attack with Liquidators, but many almost hit the XIG Fighters themselves. Soon Alguros retreated. Later on, Alguros reappeared and began to attack the "place" with his cannon. Agul was called upon once again, and the two fought to a standstill until Alguros transformed into a copy of Ultraman Agul himself.

As Alguros transformed into Imit-Ultraman Agul, the real Ultra could only watch in shock. However, the fake imitator quickly deleted the pause by punching the Ultra in the face. After suffering many blows, Gamu decided to call upon Gaia, but was halted by Agul. Suddenly, the giant of the ocean spun into the air and crashed upon the fake. Then he rained the imitation with many blows, but was halted when Alguros launched Liquidators at him. Undeterred, Agul and the imitation had a duel of Photon Crushers. But Agul's was obviously more powerful and destroyed the fake easily.

Imitation Ultraman 80 (にせウルトラマン80 Nise Urutoraman 80) is a fake version of Ultraman 80 that appears alongside Ultraman Boy. However, not much to be known about him at this time.

A figure of Alguros' Ultraman Agul disguise is first released as an Ultra Hero Series figure, being a redeco of the original Ultraman Agul mold. The figure replaces the eye's yellow with reddish pink, and the black paint with gunmetal.

Imit-Ultraman Agul is released in a monochromed Ultra Hero Series packaging, without any ID Number.

in 2002, the figure was reissued for the 2000 Ultra Hero Series lineup, with minor changes on the eyes, painted with a dash of white on the reddish pink to represent the reflection of the lighting on the eyes. The blue color in this figure had a matte finish, as the original ATBC-PVC material was replaced into PVC.

A smaller version of Alguros' original form is also available as part of the Play Hero VS lineup, bundled with Ultraman Agul.

The packaging art with Alguros and Agul contains the two figures.

Alguros in his transformation pose

A promotional of the episode Alguros appeared in

....Imit-Ultraman Agul is destroyed by the real Agul 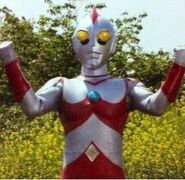 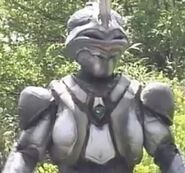