None
Algona (アルゴナ Arugona) is a Kaiju that hatched from an ancient egg. He first appeared in Ultraman Gaia.

Algona's egg was discovered by a scientist and was supposed to be delivered to XIG's air base. However, Algona's egg spewed out an acid goo, which burned a hole in the plane and fell to the land below.

Then some time later, while some people were playing basketball, the Algona's egg fell into their net. The people then decided to take care the egg and then sent a ransom note to the press, and they call themselves "Alien Fuluda" (フルータ星人). When the KBC News Crew got the photos of the Algona's egg, they reported them to X.I.G.

Before the ransomers decided to send another ransom note, they found out that the egg was growing bigger and bigger. The criminals then decided to take the egg to the country side, so it wouldn't hatch in the city. However, their trail was picked up by the KBC Crew and a scientist. After the ransomers drop the egg off in the county, the KBC Crew, and the scientist catch up to them and ask them what they had done to the egg.

As the ransomers begin to explain how they found the egg, the egg hatched into Algona. Not long after Ultraman Gaia quickly arrived, and the two engaged in combat. Ultraman Gaia was being easily overpowered by Algona's strength and energy beam. However, Ultraman Gaia managed deliver some damage to Algona, then Gaia quickly turn the tables and overpowered Algona, Gaia then change into Supreme Version and handle the monster easily. Before Ultraman Gaia could finish the monster, the scientist told him to not destroy Algona but to preserve him. Ultraman Gaia then used his Gaia Blizzard and froze Algona and took him to the Arctic for the monster for future study. Though Algona had been spared by Gaia, the cold temperatures of the Arctic where the laboratory was meant that hopefully, he wouldn't be a threat to anyone any time soon. 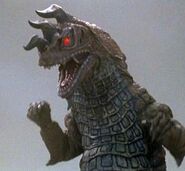 A promotional picture of Algona