On the surface, Alexis acts in a gentlemanly way and speaks in a calm, polite way to everyone he meets. However, he is really a manipulator who had been using Akane's negative emotions from the very beginning.

Additionally, being immortal has left him with a deep emptiness that he feels can only be satisfied by seeing the ideals of people being crushed over and over again, which is why he helps Akane create Kaiju in the first place. Once he had no more use of Akane, he tried to flee and find another person to leech off.

Alexis・Kerib was a malevolent immortal being who reveled in the negative emotions of others. At some point, he found Akane Shinjo, who harbored within her what Alexis sought. Using her, he helped her create a supposedly perfect world, but he knew that she could not control everything, and imperfections were bound to exist. Alexis once fought Gridman, who was chasing him from the Hyper World, and won, having split up his consciousness into parts.

Alexis was first seen in a computer screen, commenting that the model of Ghoulghilas made by Akane was quite good. He then turned it into a giant using his powers. Awakening Alexis helps Akane create the various Kaiju throughout the series. Secretly, he was simply using Akane's Kaiju to destroy the city and have it rebuilt every time, simply for his enjoyment.

Later on, Akane invites Yuta out for a meal, where they are joined by Alexis. Much to Yuta's surprise, no one takes notice of the alien figure, implying he has a similar cloaking ability as the Illusion Monsters. Just as Yuta's about to eat, his Primal Acceptor goes off, revealing a Kaiju is attacking. Akane goes home, confused that a Kaiju is attacking without her creating it, and Alexis reveals to her that Anti was the one who designed this creature and asked him to bring it to life, much to Akane's displeasure. After Gridman and Sky Vitter destroy Diriver and beat Anti again, Alexis directly confronts Anti, who punishes the human lookalike by stealing his buzzsaw and slashing his face. Scheme

Alexis continued to create Kaiju designed by Akane and, towards the end, pushed her into creating more despite her being reluctant to. Collapse After Akane loses the will to make more Kaiju, Alexis revives many Kaiju that were previously defeated by Gridman. When all of them are defeated, he uses his Instance Abreaction on Akane, turning her into a Kaiju. Decisive Battle

Rikka confronts him but Alexis reveals to her that she is simply a manufactured imitation, a Repli-Compoid. His words fail to phase Rikka. Anti rescues Akane from her Kaiju form but just as he does, Alexis impales him with a massive sword and swallows Akane with his cloak. Absorbing her negative emotions, Alexis evolved into Giant Alexis・Kerib. He fought Gridman, who had regained his true form, and was initially winning until Gridman realized his true power was not simply to attack and destroy, but also to repair and mend. With that, Gridman blasted Alexis with the Grid Fixer Beam, clearing Akane's heart and thus weakening Alexis. In a final clash, Gridman won and all that was left of Alexis was a smoking shard, which was sealed away and taken back by Gridman and the Neon Genesis Junior High Students to the Hyper World. Awakening (Finale)

It is likely that Alexis retains all his abilities from his normal-sized self and may have had these abilities then as well. 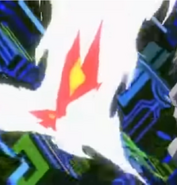 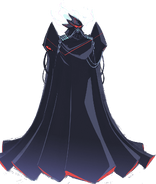