"Ultraman, you can do it. Ultraman!"

―Fuji yelling at Ultraman to stand up and face Zetton.

Hiroko Sakurai
Akiko Fuji ( Fuji Akiko) is the main communications officer of the SSSP, as well as the only main female character from the Ultraman.

Akiko is the only female member of the main SSSP team who's mainly in charge of communication. However, she was also seen in action on some missions. Despite never taking a holiday during her job but she had once seen in vacation in episode 4. Akiko also had become targeted by evil aliens on some occasions (etc: Alien Zarab, Alien Mefilas and Alien Zetton).

An alternate Akiko Fuji appeared in this manga where her role was the same as the original alongside with other main characters. However, during the final arc of the manga, it was revealed that she was possessed by an Alien Baltan all along ever since the first Baltan's defeat at the hands of Ultraman. Alien Baltan races seek revenge by possessing Fuji to monitor Shin Hayata/Ultraman's fight by sending various monsters that they mutated from Earth organisms in order to create their ultimate kaiju, Zetton. When they captured Hayata on top of the space sattelite, Fuji threatened him by attempting to destroy his Beta Capsule using her supergun. However, it hit on her arm instead and seemingly attempted to kill herself. A Baltan was released from her and fatally attacked her with a single beam. While being tossed out from the satellite as a result of the said fatal attack, Fuji threw the Beta Capsule to Hayata, allowing him to transform into Ultraman. In the end, after Zetton's death, Ultraman was visited by Zoffy where he urged Ultraman to return to the Land of Light. The Ultra agreed, under one condition that both Fuji and Hayata must be given a second life force.

An alternate Akiko Fuji appeared in this movie where she is the wife of an alternate Shin Hayata/Ultraman.

After Hayata and his friends' arrival to Earth and him forgotten his memories of being an Ultra, he met Akiko Fuji and married sometime later as they had a daughter named Rena. Years passed, they run a bike shop with Rena working as a reporter. After witnessing Tiga, Dyna and Gaia, Akiko and Anne visited and reminded them of their dreams, causing each others' transformation items to appear and transformed the men into their respective Ultras, freeing Ultraman Mebius and assist the remaining Ultras in a fight against Giga Khimaira and Black Silhouette. In the end, Akiko alongside Hayata their friends journeyed to the Land of Light, riding their jets and ships with Akiko and Hayata piloting Jet VTOL while wearing SSSP uniforms. Great Decisive Battle! The Super 8 Ultra Brothers

An elder Akiko Fuji appeared in this manga where she becomes the chief of the renewed SSSP. Like most of the SSP members, after the events of the original Series, the SSSP officially disbanded however, the members of the original team, now knowing of Hayata's secret, that he was the host of Ultraman, sought to protect their amnesic friends from becoming a lab rat.

While working in the new SSSP, Fuji appears as Moroboshi's superior, while he was having some manner of tests done on him. She reminded him that he was pushing himself too far.

Giant Member Fuji (巨大フジ隊員 Kyodai Fuji taiin) was the giant form of Akiko Fuji after Alien Mefilas used his saucer to turn her large temporarily in order for her younger brother to give him the control over Earth.

When Alien Mefilas kidnapped Shin Hayata, Fuji and her little brother, he turned Fuji into a giant and placed her in the middle of a city, and tried to convince Satoru to give him the Earth in return for a star, explaining that he wanted to "challenge the heart of an earthling". But Satoru refused to give Alien Mefilas the Earth. Enraged, Alien Mefilas made the giant Fuji go on a rampage in the city. The SSSP, who had arrived earlier where tried to keep the police from hurting Fuji. Alien Mefilas then made his presence known to them and took away Fuji and replaced her with illusions of Alien Baltan, Kemur, and Alien Zarab. Capt. Mura demand that Alien Mefilas show himself, but the alien said he could see them and said he wanted the hearts of the Earth. The SSSP asked what he meant, but heard him arguing with Satoru, who still refused to give in to the Mefilas Man's wishes. Alien Mefilas then turned off his illusions and left the SSSP dumbfounded. However the conversation gave the SSSP the time they needed to located the Mefilas space ship, and an air strike was sent to assault.

With his ship under attack and again with no other option, Alien Mefilas seemed to runaway and leave his ship behind, while the Science Patrol rescued Fuji and Satoru. 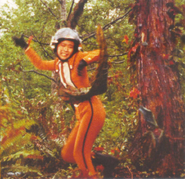 Fuji in a SSSP scuba suit 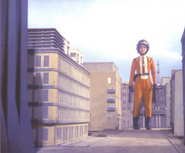 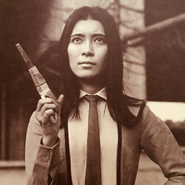