Akiji Kobayashi died of lung cancer on August 27, 1996 in Yokahama, Japan. He was 65 years old at that time. 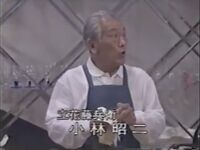 Retrieved from "https://ultra.fandom.com/wiki/Akiji_Kobayashi?oldid=535674"
Community content is available under CC-BY-SA unless otherwise noted.