Reina Ueda (Japanese)
Coco Nitta (Live Action)
Lindsay Seidel (English)
Akane Shinjo (新条 アカネ Shinjō Akane) is the secondary antagonist of SSSS.GRIDMAN. Portrayed as a classmate of Yuta and his friends, she is a student who was popular for her appearance and talent. However behind that facade lies a troubled individual.

A troubled girl, Akane reached out to Alexis・Kerib. Wanting to leave her troubles behind, she had Alexis create a perfect world for her in the Computer World as a form of escapism. This somehow put her real self to sleep.

Known at school as being both highly attractive and something of a genius, Akane is known for being a bubbly individual. However, this is a facade as Akane is clearly a psychologically damaged individual, harboring murderous intent towards anyone who wrongs her, even in the most minute of ways. Somehow, Alexis・Kerib managed to contact her through her computer and with his help, Akane creates the invading Kaiju to impose revenge towards all who do her wrong.

When Gridman gets in the way of her Kaiju attacks, she becomes obsessed with getting the Hyper Agent killed. She also suspects Yuta Hibiki of being the one who transforms into Gridman. Suspicion Using cunning and wits, she gets him and his friends Rikka Takarada and Sho Utsumi to gradually reveal his secret Provocation and when she confirms that Yuta transforms into Gridman, she sends Anti to personally kill him. Anosillus the 2nd tells Yuta that Akane is like a god watching over the city and reveals to him that she is the one sending all the Kaiju to attack, with the help of someone far more dangerous, and that the city being reshaped is because of her through the Venoras. Contact

Seeing Anti at school, she kicks him on the forehead telling him to quiet down and while she left, she stepped on the Special Dog he stole from Yuta. Wanting Yuta to join her, she somehow gets into his house and tries to seduce him, but he declines, saying that he has people to protect, which are his friends. Although she was surprised that he knows the truth, she demanded that he walk her home and when asked if she really is the one making kaiju, she introduces Yuta to Alexis over a meal. However, their dinner was interrupted by the appearance of a UFO. When she seeks Alexis for answers, he tells her that Anti got him to make a kaiju. After Anti lost the battle, Akane sent Alexis to discipline Anti. Scheme

Knowing that the school's Culture Festival was going to start in a few days, she created Mecha Ghoulghilas, wanting to use it to ruin the festival because she hates it. She even shows off her Mecha Ghoulghilas figure to the Gridman Alliance after knowing that the three of them know the truth about her. While riding the bus with Rikka a few days later, she explains to her that she created the city and everyone in it, Rikka included, preprogrammed to like her no matter what she does. On the day of the festival, she releases Mecha Ghoulghilas but her creation fails once again, which makes her lose her confidence. Confrontation Later, Akane traps the Gridman Alliance in a dream world using Bujack, in which she creates the 'ideal world' she envisioned to have along with the three of them. She becomes Yuta's girlfriend, buys Ultraman Series toys with Utsumi and hangs out more with Rikka. However, sensing something was wrong, the three of them eventually reject her and wake up because of Gridman's power. Unable to connect with them even in dreams, Akane falls off the construction crane she was sitting on. She lands on her feet unharmed and drags herself away into the mist, alone. Dream

Demotivated, Akane skips school for a week and relocates the inside of her house to an unknown location reminiscenet to the city in the sky. In a dream, she sees all the victims of her monsters and wakes up disturbed. Alexis pushes her into making a new Kaiju and she eventually selects one for him to bring to life. After its first attack and subsequent defeat by Gridman, she wanders the city and encounters Anti. She tells him he is a failure and he should go somewhere else. Depressed, she sees another monster emerge from the corpse of the first, going about decapitating the monsters beyond the fog. While returning home, she sees Yuta transform via Junk and after he returns, she stabs him using her yellow cutter. Collapse Totally demotivated, Akane wanders the city until she is approcahed by Alexis, who once more demanded she make a new kaiju, to get rid of Gridknight. Akane can no longer make kaiju, however, as she no longer has the mood to do so and in response, Alexis revived all her prevous Kaiju instead. Akane was later confronted by Rikka who wanted to reach out to her but, interupting their conversation, Alexis appeared and used his Instance Abreaction on Akane herself. Decisive Battle

Akane was trapped inside Zegga, and tormented by her grief and past victims until Anti rescues her. However, Anti is impaled by Alexis, who proceeds to integrate her into himself and feed off her negative emotions, thus turning into Giant Alexis・Kerib, prepared to destroy the ideal city Akane created. Gridman, in his true form, fires the Grid Fixer Beam, which mends Akane's heart as the Gridman Alliance comfort her. After Alexis was finally defeated, Akane has one last talk with Rikka and is finally given the pink pass case. She then leaves the Computer World.

The series ends with Akane waking up in real life. Awakening (Finale) 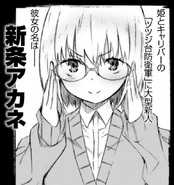 Just like her predecessor, Akane's inspiration for her monster creations varies from her petty grudges against anyone, even if it was an accident. Later on, most of the monsters she creates are for the purpose of destroying Gridman:

Akane has a vast collection of Ultra Kaiju in her display shelves in her room. Considering her sculpting skills, she may have made all of these herself.