Active
Agulater (アグレイター Agureitā) is Hiroya Fujimiya's transformation device. He uses it to harbor the blue light and to transform into Ultraman Agul. It resembles Agul's Color Timer in the center with two blades that open-up.

Its origin is unknown, but is assumed to be built by Fujimiya the same way Gamu Takayama built the Esplender. During the events of Zoruim's attack, Fujimiya discovered that Crisis had been manipulating him, and after losing hope in himself, gave the Blue Light to Ultraman Gaia, rendering the Agulator useless. After Agul V2 was unlocked, the Agulator's powers were restored, while Gamu kept the original blue light.

After the fight against Zog, the Blue Light was rendered useless and neither Fujimiya nor Gamu could transform, until the events of "Once Again Gaia" where their light was restored by the Rinar, a race of advanced deep sea beings.

Fujimiya stretches his right arm downwards and the Agulater opens. He then brings his arm up and the Agulater flips and transforms him into Agul via a bright stream of azure light. He may occasionally yell "AGUL!" during the transformation process. In Once Again Gaia, Fujimiya held the device directly on his hand and transform in a similar manner to Gamu with his Esplender.

Fujimiya brings his arm up

The Agulater revolves and Fujimiya transforms 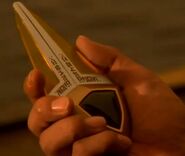 The Agulater after being activated, as shown by the open blades 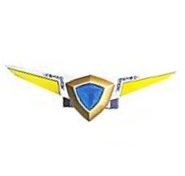 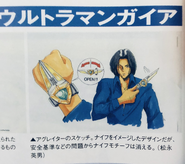