Ajugon was one of many Kaiju placed in the monster asylum by the U40 warriors. Once the Imedo Beings hijacked the asylum, they set it toward Earth and released the Kaiju from their imprisonment. Shortly after this, the Scientific Defense Guard landed on the planet surface with Agujon among the Kaiju to defend it. After Ultraman Joneus  destroyed Goadarion, other Kaiju were sent to dispatch him while Agujon was left behind to lead the Kaiju against the Scientific Defense Guard in place of Plazoon. However, thanks to the tenacity of the team with Kei's weapon expertise they managed to slay Agujon using an experimental laser cannon to destroy him. 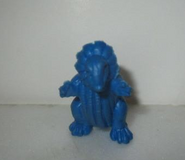 An Agujon eraser.
Community content is available under CC-BY-SA unless otherwise noted.
Advertisement