None, Aeroviper lives in between dimensions

Aeroviper suddenly created a wormhole which sucks Gamu into it. Aeroviper then takes Gamu into the future and attacks him, so Gamu makes an emergency landing. In this time, Gamu saw Earth become a desert landscape. More shockingly, Gamu also saw the XIG base was annihilated. As Aeroviper waits for another attack, Gamu began to remember memories that everyone had. It was revealed that after Gamu disappeared into Aeroviper's wormhole, the Team Falcon had dispatched to attack the beast as the battle ended up with both sides killed (this is can be seen where a XIG Fighter SS and two XIG Fighter SG crashed with the Kaiju's carcasses). A burial was made at the ruined of the Aerial Base with Commander Ishimuro and the whole XIG Team paying them a final respect. Realizing that Gamu can overcome this future and change it, he then starts to battle Aeroviper once again. However after his plane crash, Gamu changed into Ultraman Gaia. Aeroviper's flight ability makes Gaia have a difficult time defeating the monster, Gaia then strikes Aeroviper horns. destroying them. However, the warp hole begin closing and warp time become unstable, Gaia then starts to finish it quick. Gaia then changed into Supreme Version and using Shining Blade, defeats the monster. Gaia then rushed into the warp hole and successfully came back.

Time Warp
Add a photo to this gallery 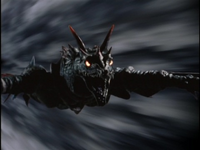 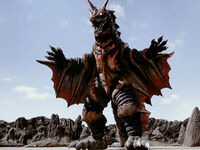 Add a photo to this gallery
Retrieved from "https://ultra.fandom.com/wiki/Aeroviper?oldid=509922"
Community content is available under CC-BY-SA unless otherwise noted.