Ultraman Wiki
Register
Don't have an account?
Sign In
Advertisement
in: Articles under construction, Ultraman Gaia, Mechas,
and 5 more

This article is under construction and is most likely a work in progress. Thus, excuse the informal look of the article while it is being worked on. Please help fill in the content if you are able to.

Please remove this template when the article is complete.

GUARD
XIG
The Airborne Carrier Base "Aerial Base" (空中母艦基地「エリアル・ベース」 Kūchū Bokan Kichi Eriaru Bēsu) was an airborne carrier operated by GUARD from the TV series Ultraman Gaia. It was the main base of operations for GUARD's specialized unit XIG.

The Aerial Base was Earth's first line of defense against all that could be considered a threat to humanity. It utilized the Repulsor Lift, an anti-gravity device developed by the Alchemy Stars, to stay afloat above the equator line. Functioning primarily as an aircraft carrier, it had a sizable hangar space and flight launch systems to facilitate its special complement: the Container Mecha.

Hiroya Fujimiya, the human host of Ultraman Agul, had almost forced all of the base's systems to fail in response to his warnings of humans being the world's end from Crisis. Agul vs. Gaia

The base came under attack by the rogue Crisis Ghost virus. However, Atsuko had managed to kill it via her "gaming skills". A New Battle ~Version-up Fight!~

The Future Seen Before

The Aerial Base came under attack by the time-traveling Aeroviper. Team Falcon, albeit sacrificing themselves in the process, successfully defeated the kaiju. However, their actions did not prevent Aeroviper from bringing down the Aerial Base. As a result, the Aerial Base crash landed on an unspecified location. The event was fortunately reverted when Gamu and Team Falcon, having traveled to the alternate timeline, defeated Aeroviper before it could realize its goal. The Future Seen Before

The Sky of Reunion

TBA The Sky of Reunion

In the Ultraman Gaia: Gaia Again, Team Falcon Leader Tatsuhiko Yoneda mentioned that a second Aerial Base was nearing its completion.

Serving as humanity's first line of defense, the Aerial Base also functions as a battleship under critical situations. Fire control is operated by the Aerial Base's combat system "Battle Bridge G-Lane". In the event the system is inoperable or disabled, fire control operations can be transferred to Gamu's artificial intelligence, PAL. The Aerial Base is armed with the following armament:

In case of a hull breach, the Aerial Base has an emergency shield system that would automatically activate to maintain atmospheric pressure. XIG Destroyed!? Whether this shield is energy-based or used physical doors is unknown.

Presumably one of the B4 Block guns. Note the shorter barrel when comparing with the larger single-barrel guns. 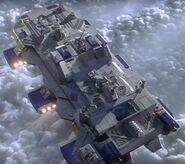