Alien Chibull Exceller notices Shepherdon has a lot of Victorium energy. Exceller sends Gan-Q to suck the Victorium out of Shepherdon, to take him down! In order to prevent this, UPG joins with the original captain, and come up with a daring strategy! Translated Official Synopsis

At the UPG Live Base, a strange giant eye came from a wormhole and attracted Shepherdon out. It later appeared, revealed to be a Monslived Gan-Q by Vorst where he splits into two and absorbed Shepherdon's Victorium that contained a lot of energy. At the Victorian civilization, the Victorians watched this as Hiyori revealed that Exceller tried to siphon all of Shepherdon's energy. The UPG team witnessed this and began an operation to save the monster by using a magnetic wave.

Android One Zero was sent by Exceller to infiltrate the UPG Live Base so that they won't interfere their plan. She lead an army of Chiburoids and attack several guards. The UPG members and Live Base staffs tried their best to hold the army off. Sho arrived at the scene and fired one of the two Gan-Q to save Shepherdon. He fired a Gudon-charged bullet from his Victory Lancer but a Gan-Q absorbed it and return fire at Sho, knocking him. Shepherdon regained his strength and pushed Gan-Q, knocking him down and stomped the monster rapidly but Vorst quickly turn the tables by swapping Gan-Q with Fire Golza and the Gan-Q clone continued to absorb Shepherdon.

The Live Base staffs completed their objective, managing the UPG Captain to fire a magnetic wave blast via the Base's parabolic antenna. Gan-Q was knocked down from the blast but it took Fire Golza's attention as he began to attack the base. Sho quickly recover and transform into Ultraman Victory to save them and Hikaru into Ginga to save his leader. Arisa Sugita tracked One Zero to the basement and successfully killed the robot but found herself with the robot's bomb activated. Tomoya rushed to her and began to disarm the bomb. Victory and Ginga found themselves occupied while trying to save Shepherdon until Victory used King Joe Custom's Pedanium Launcher and fired all of Gan-Q's clones. The real Gan-Q was destroyed by UPG Captain Yoshiaki Jinno whom used the parabolic antenna as Magnetic Wave canon and Victory's Victorium Shoot. Ginga morphed into Ginga Strium and finished Fire Golza with Zoffy's M87 Beam.

Despite all three monster and alien reverted to Spark Doll, but they were retrieved by Exceller via teleportation. Meanwhile, Tomoya successfully disarm the bomb while Arisa fell exhausted after trying to hold the bomb from breaking up. As nearly everyone rested, Exceller threw away Vorst's Spark Doll and released himself from his Exo-suit. Then, he Monslived on his own with five Spark Dolls; Golza, Melba, Reicubas, Gan-Q and Super C.O.V..

When Ginga and Victory was about to escort Shepherdon, suddenly the sky turned dark followed by a series of thunders and a wormhole appeared, bringing out a monster named Five King. Ginga Strium and Victory fired their finishers on him but it used Gan-Q's power to absorb it and return fire at them, with Shepherdon step in and took the blow instead. Enraged, Sho/Victory charged but Five King used Fire Golza and Melba's attack to knock him. Hikaru/Ginga charged while armed with Ginga Spark Lance but defeated by Super C.O.V.'s power. Everyone can only watched the whole event in horror as Five King roared in victory. 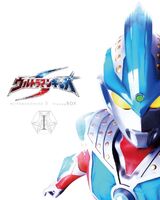