This may not be the article you are looking for. For the robotic version of Ultraman Ace manufactured by the Alien Salome, see Imitation Ultraman Ace (SR).

―Yapool, to Ace Killer and the Ultra Brothers, Ultraman Ace episode 14 "The Five Stars that Scattered Throughout the Galaxy"

Ace Robot (エースロボット Ēsu Roboto) is a robot and a test dummy created in the likeness of Ultraman Ace used by Yapool in Ultraman Ace TV series.

Ace Robot was a robot built and designed by Yapool after studying Ultraman Ace's battle tactics and beam attacks. In the end, he captured all four of the Ultra Brothers and imprisoned them on crosses. After having Ace Killer absorb their powers and confiscate Jack's Ultra Bracelet, Yapool released Ace Robot while gloating about Ace Killer's strength. Trapped, the Ultra Brothers were left with no choice but to watch the scene unfold. The ground split open, and from the mist, Ace Robot was deployed. When Yapool shouted the command "Fight!", Ace Robot fired its Metalium Beam into Ace Killer's face. Ace Killer shrugged it off easily and hailed upon the robot with Emerium and Spacium Beams, leaving Ace Robot in an unusually convincing state of pain. Then, Ace Robot was knocked down by the Ultra Bracelet's Bracelet Bomb, leaving the robot writhing on the floor in agony while Ace Killer continued to fire beams at him. Finally, Ace Robot was destroyed when Ace Killer fired the M87 ray into his body, blowing it to pieces. As Yapool announced the test to be complete, the Ultra Brothers looked on in shock, aware that the destruction of Ace Robot, who was supposedly on par with Ace in terms of strength, meant that Ace was in grave danger should he and Ace Killer fight. 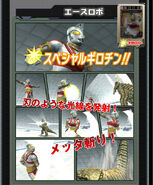 Ace Robot is one of the playable characters appearing in FE3, first being playable in a Story Mode level based on his debut episode. Two outcomes can be carried out by the player:

In the seventh chapter of Galaxy Saga Mode, the originally destroyed Ace Robot was revived to fight the real Ultraman Ace, all while Oki watched the battle as a spectator.

Mechaniwettle King (メカニウェットルキング Mekaniuettoru Kinggu) is a robotic version of the original Wettle King that Keroro Platoons (save Giroro and Dororo) created to enact their revenge on Natsumi. This robotic counterpart resembles Ace Robot and Jumborg Ace. Ace Robot's resemblance here however is only his metal bands on his thighs and arms, along with being robotic counterparts of the original ones.

Ultra Hero Series Ace Robot is a 6-inch soft vinyl figure that is based on his appearance in the TV series. Molded in red ATBC-PVC plastic, Ace Robot features silver, gold, some blue (color timer) and cream (eyes), and some black (the hole on his crest) paint.

While similar to the Ultraman Ace figure proportion-wise, he is not a retool, but a new mold. Like the same year's Imit Ultraman Gaia, this figure is one of the few Ultra Hero Series toys that do not have a vintage release.

Currently released as the largest and expensive bundle for the ULTRA-ACT line, this Ace Robot is a highly-poseable action figure with over 20 points of articulation, with most of the engineering borrowed from the renewal version of the Ultraman figure. Other than a set of hands, a replaceable color timer crystal, and a Robot Metallium Beam effect part, Ace Robot also comes with five pieces of Golgotha Crosses (complete with metal chains), which is compatible with 4 ULTRA-ACT Ultra Brothers (5 if you include Ace himself to recreate your own bad ending).

This set is available exclusively as a Tamashii Webshop exclusive, and it can be ordered between 25th of September from 16:00JST until the 26th of November, 2014 at 23:00JST, and the product will be shipped this March 13, 2014.