"Stay out of my way, you useless piece of trash."

―Ace Killer to one of his men, after killing him.

Ace Killer is a rather relaxed fellow, despite the bloody work he does. He seems to be always calm and collected and making light of the situation, whether it is torturing someone or simply making light of a grim situation. Even in the face of certain death and after being enraged, Ace Killer can still find it in himself to crack a quip.

He also seems to have a serious lack of concern for sentient life. This is especially true when he becomes angry and will kill even his men if they get between him and the object of his anger.

He is extremely confident of his ability as a contract killer, taking the name "Ace Killer", meaning "best among killers".

Ace Killer was in fact the being who caused the crash of the plane carrying Seiji's family and an Inspection Party from the Star Cluster Alliance. Yapool was a member of said Inspection Party and saved Seiji, the only human survivor, although he refused to tell the true version of the crash. When Seiji confronted Yapool with a photo of Ace Killer's blade, the alien admitted that Ace Killer was the assassin but not the mastermind.

The mercenary was later seen accepting a job from an unknown person to kill an Ultraman. Soon afterwards Shinjiro and Moroboshi responded to a report containing evidence of alien activity. When they arrived at the site of Ace Killer's human harvesting operation, Moroboshi told his companion to wait outside while he investigated the building. However, the human warehouse underneath the building was rigged with a bomb, and the building was destroyed in a massive fireball.

From the blaze emerged Ace Killer, Alien Woovelve, Alien Nepenthes, and the rest of his goons, who were surprised by the appearance of Shinjiro as well. One of the squad informed Ace Killer that Moroboshi was not their target, prompting him to attempt to eliminate Shinjiro to cover it up. However, Seiji also arrived, their true target.

A large battle erupted between the aliens and Ultramen, made even more chaotic with the timely arrival of Jack and Red. Even then, the Ace Killer Squad was dominating until Shin Hayata arrived in the prototype Ultraman suit. As Red fought with Woovelve and Shinjiro took on Nepenthes, Ace Killer chased down Seiji.

Ace Killer managed to literally disarm Seiji, severing one of his prosthetics. The two began to argue before Ace Killer fulfilled his name, but he also lost an arm when Seiji recovered. Seiji stood and prepared to fight the alien, declaring that he was an Ultraman and that he planned to mow Ace Killer down. Seiji used a weapon of his own to remove Ace Killer's arm in turn, enraging the assassin and causing him to slay one of his own men.

Choosing to kill him personally, Ace Killer dashed back and forth, slashing Seiji until plunging his hatchet into his chest. This proved to be his undoing as the boy grabbed him and pinned him down, removing his hand to turn his arm into a giant beam cannon. Ace Killer resigned himself to his fate, and Seiji vaporized his head with a blast to the face.

Ace Killer and his gang were responsible for bringing down the airplane that Seiji Hokuto and Yuko Minami were in, years before the start of the series. They were not the true masterminds and were simply the perpetrators, who sent them to assassinate a research team for the Star Cluster Alliance.

In the present, Ace Killer and his gang appear attacking an oil rig, looking for Yuko Minami. Always Stay the Way You Are However, they were unable to find her because Bemular had already brought her to safety. The SSSP, or perhaps Edo himself, were able to track down their hideout which was in a mansion in a forest. Despite being warned by his subordinate Alien Nepenthes that attacking the SSSP would lead to trouble, he decides to kill the two Ultramen since he already killed several other SSSP members in the blast. He repeatedly shoots Shinjiro and has Nepenthes bind them to lure out Seiji, who appears shortly. Ace Killer He and his men badly beat Seiji and incapacitate him, putting him in a daze. He snaps out of it and slices off Ace Killer's left arm, enraging him. Ace Killer then proceeds to slash Seiji multiple times before damaging his left arm and impaling him in the chest, but Seiji takes the opportunity to blast a hole through Ace Killer's torso, which seemingly kills him. However, Ace Killer rises again, and plans to use Seiji's skull as a cup. This enrages Shinjiro, who quickly kills Nepenthes before dealing with Ace Killer. Ace Killer is no match for his opponent, who disintegrates him with a Spacium Beam.

Ace Killer's fallen hatchet emits a signal to a spaceship, which drops a bomb towards Earth. Bemular suddenly appears, firing a Spacium Beam that destroys both the bomb and the ship that launched it. The Real Ultraman 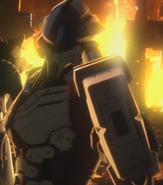