Ace Killer (エースキラー Ēsu Kirā), also known as Mebius Killer (メビウスキラー Mebiusu Kirā) and Victory Killer (ビクトリーキラー Bikutorī Kirā), is a robotic assassin from the TV series Ultraman Ace, first appearing in episode 14. Ace Killer and his variants are designed to be as strong (if not stronger) as their Ultra counterparts.

Ace Killer was a creation of Yapool in an attempt to kill Ultraman Ace. By luring the Ultra Brothers onto a desolate planet and forcing Ultraman Ace to battle the Terrible-Monster, Baraba on Earth. Ace Killer was released and absorbed the powers and weapons of the Ultra Brothers. With their power, Yapool released a robot replica of Ultraman Ace to demonstrate Ace Killer's power. Withstanding a Metallium Beam, Ace Killer used a barrage of Ultraseven's Emerium Beam and Ultraman's Spacium Beam to weaken the robot until it destroyed it with a variation of Zoffy's M87 Beam.

The magazine series of Andro Melos revealed that the original Ace Killer was resurrected by the Gua Army into Remodeled Ace Killer (改造エースキラー Kaizō Ēsu Kirā) and conscripted into their force of the remodeled monster army.

In June 1981 issue, the Ace Killer fought against Zoffy at some point after Ultraman 80 finished his mission on Earth. The Ace Killer threw Zoffy into a black hole and was killed by Andro Melos, who happened to be the disguised Zoffy.

In February 1982, Ace Killer was revived alongside the other remodeled monster army. The entire team trap Melos and Andro Wolf inside a flaming vortex, but the two were able to escape and defeat the entire army.

Mirai had gone on a walk in the park with a girl he'd met, but Yapool was spying on them, disguised as a human once more. He held a clutch of balloons with him; these looked innocent but had devious powers. Yapool finally confronted Mirai, as he was dealing with an annoying, smug reporter, revealing his true identity as Yapool. But rather than fight him, he released a red balloon with gold stripes into the sky. The balloon opened up a dimensional hole, and from it, Ace Killer emerged! Yapool teleported to a safe distance to observe, as Ace Killer made his way toward Mirai, crushing anything in his path. The reporter made a hasty getaway, but Mirai stayed with the girl, telling her to run, and that he'd take care of Ace Killer. Mirai ran off to transform into Ultraman Mebius, but unknown to him, she followed him and witnessed his transformation. Mebius confronted Ace Killer, who proved to be a much better fighter. Things only got worse as Yapool called Gadiba into action. The little gas monster leaped into Ace Killer's body, and gave him new abilities; he was now Mebius Killer.

After Gadiba transformed Mebius Killer, Yapool ordered Mebius Killer to first use the Mebium Shoot; placing his left palm over the green pendant on his right forearm, Mebius Killer charged his hands with energy and performed the Mebium Shoot. It struck Mebius' body, but he sidestepped most of it. Yapool, laughing, ordered him to fire it again, but this time, Mebius fired his own Mebium Shoot, and the two were evenly matched. Yapool then ordered Mebius Killer to use the Mebium Blade, which formed out of his green pendant. Mebius pulled out his blade as well, but Mebius Killer was stronger still and outmatched him. Finally, Yapool ordered him to use the Mebium Burst. The ball of fire struck Mebius with great force, and Mebius fell to the ground as Yapool laughed. Mebius tried to get up, but he was too weak. That's when the girl ran up and spoke to Mebius; she believed in him and his strength. Mebius wouldn't give up now, and he got back up to fight once more. This time, however, Mebius was winning. Mebius Killer grappled with Mebius and was overpowering him. That's when Mebius pulled out his newest power; his body began glowing red, and then he engulfed Mebius Killer and himself in flames! It was Mebius' version of the Ultra Dynamite move Ultraman Taro uses; the Mebium Dynamite! Mebius Killer groaned in agony as Mebius' flames burned his flesh, but Mebius kept a good grip on him, and finally, with one last burst of power, Mebius caused the finishing explosion, destroying Mebius Killer once and for all. Unfortunately despite its destruction, Mebius Killer fulfilled its purpose to exhaust Mebius, allowing Yapool to kidnap Mirai, Aya, and Hirukawa into his dimension. Threatening Mebius-Killer

Mebius Killer returned as a body possessed by Yapool in Ultraman Mebius Gaiden: Ghost Rebirth as part of the assembled Dark Four Heavenly Kings. To denote his revived status, he is labeled as Mebius Killer (G) (メビウスキラー Mebiusu Kirā Gōsuto)

The Heavenly Kings assaulted the Ultra Brothers in an attempt to reunite the Giga Battlenizer and Mechazam in an attempt to resurrect Alien Empera. However, their plans are foiled when Ultraman Mebius loses the Giga Battlenizer and Mechazam sacrifices his life to keep The Emperor from being revived. In the end, he battles Ace and is destroyed by his Metallium Beam. Ultraman Mebius Gaiden: Ghost Rebirth

In part 1 of the special, after Gomora destroys a Legionoid Beta, Ace Killer (as well as Inpelaizer and King Joe) appear and together with the team up and beat down Gomora, forcing the monster back into Rei's Battlenizer. Shortly after, the Ultimate Force Zero arrives on the scene and battles the robots. Glenfire battles with Ace Killer and eventually destroys the robot by pile-driving him into the ground. Ultraman Zero Gaiden: Killer the Beatstar

He was a participant of the Dark Spark War turned into a Spark Doll by Dark Lugiel.

In episode 7, Ace Killer along with many other Kaiju and aliens are seen cheering on Ginga as he fights Dark Galberos.

It is assumed that after Ultraman Ginga defeated Dark Lugiel, he traveled back into space to return to Yapool's dimension, having regained his original form.

Ace Killer was the guard of a captured Ultraman Ginga, on orders from Yapool on Satellite Golgotha. He then dueled Ace there when he came to save Ginga. They were an even match for the most. After Ace launched the Ultra Guillotine attack, Ace Killer was thought he finished off. However, the Terrible-Monster survived and debuted his KillerTrans as being reintroduced by his master as Victory Killer. He summoned his new EX Red King Knuckle and struck Ace down to the surface with it. He then summoned the King Joe Launcher and fired at Ace, but the Ultra summoned his Ultra-Neo Barrier to deflect the energy bullets. Victory Killer then attacked Ace from behind, summoning his Eleking Tail, and defeated Ace by striking him with it many times. He was about to finish off Ace when Ultraman Victory showed up, used his Knight Timbre to transform into Victory Knight, and began to fight him. When the latter summoned his Sadola Scissors, Victory became shocked by this and Yapool explained that he studied the Ultlance and used them to modify the robot to become Victory Killer.

While Victory was kept busy with the new and improved robot, Yapool summoned Lunaticks to kill Ginga. Victory then decided to use the Knight Timbre to bring Shepherdon back to life, the process temporally knocked away Victory Killer. Victory Killer then got back up, summoned his Gudon Whip and fought Victory again until the knight slashed him across the chest with a glowing sword twice and finally finished him off with the Knight Victorium Shoot while Shepherdon finished off Lunaticks with his Victorium Flash. Ultra Fight Victory

Ace Killer's Kaiju Capsule is used by Kei Fukuide as a component of Thunder Killer. 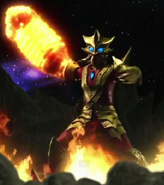 The Ultra Super Legend manga portrays the Remodeled Ace Killer in the same way as the magazine version of the Andro Melos. However, its only scene was throwing Zoffy into the black hole and defeated by Andro Melos (also Zoffy adopting a new identity). The manga also expands its sole agenda to assassinate the Ultra Brothers one by one.

In the second live stage, an enhanced Ace Killer was sent to Earth alongside Verokron. In addition to all four Ultra Brothers' finishers from Ace, he can also manifest Jack's Ultra Lance and Taro's Strium Beam. In the climax of fighting the Ultra Brothers, Ace Killer's limbs transform to resemble U-Killersaurus.

The Ace Killer, Tyrant, and Vakishim were sent by Yapool to attack Io Mikura and destroy his Battlenizer. As with all three monsters, he was killed by the player's choice of card.

In the NEO edition, he was deployed by Giant Yapool to destroy Ai Asama/Kanegon's Battlenizer in order to prevent Alien Reiblood's revival. Likewise, he is also defeated by the player's choice of monster.

In the Galaxy Saga mode story, Yapool created Kabuto the Killer (カブト・ザ・キラー Kabuto za Kirā) as an assassin sent to modify history. Kabuto went into the past where his first incarnation's fight with Ultraman Ace took place in Planet Golgotha and successfully crucify the Ultra.

Instead of Mebius Killer, Yapool created Kabuto the Killer as his new body to operate and leads an army of Inpelaizers to capture the Ultra Brothers. Using the stolen powers, Kabuto merged them into Space Q and hurl it towards Taro, but the latter used his training of Ultra Horn with his father to absorb the attack and created the Cosmo Miracle Dynamite to defeat the armored robot. With Deathrem, Kabuto leads an army of Terrible-Monster to fight the brothers. Upon his defeat, the Giant Yapool reveals himself.

In a stage show taking place a day before Ultraman Zero The Movie: Super Deciding Fight! The Belial Galactic Empire, Mebius Killer accompanied Darkgone under Yapool's orders to enslave Belial as his minion. Unfortunately, Mebius Killer was stabbed by Darkgone's Gone Blade when he becomes interested in joining Belial's forces.

In one of the stage shows held during a Dan Moroboshi meetup event[3], an Alien Raybeak by the name of Dan comes to Earth in search of parts to complete his peace-keeping robot Pisuke (ぴーすけ Pīsuke) (a pun on the literal translation of the word "peace") and in the process, ropes Ultraman Orb into helping out.

Dan makes Orb don an armor which first helps him out in defeating Chandlar by granting him a power boost, but this eventually turns out to be an energy-draining device to power Pisuke, now known as Orb Killer (オーブキラー Ōbu Kirā). On top of the powers of Ace Killer, Mebius Killer, and Victory Killer, Orb Killer was also granted the abilities of Ultraman Orb Hurricane Slash, alongside the Killer Slugger Lance (キラースラッガーランス Kirā Suraggā Ransu), a copy of the Orb Slugger Lance.

Afterward, it was revealed that Yapool was possessing Dan all along, who then takes control of Orb Killer. However, through the combined efforts of Ultraman Orb, Ultraman Ace, and Ultraseven, Orb Killer was eventually beaten.