Still in use
The Ace Blade (エースブレード Ēsu Burēdo) is a weapon made of energy used by Ultraman Ace. Ace summons the blade through use of his Ultra Psychokinesis, and generates it from his own energy.

Ace typically uses this weapon in extreme cases, as shown when he killed Doragory using it, Life of the Sun, Life of Ace and through sheer determination, as seen when he killed Sphinx after the death of the Orion girl Michiru. The Pyramid Is a Terrible-Monster's Nest!

The Ace Blade takes the form of a Katana without a hilt, and Ace typically performs several dramatic techniques with it before using it, such as twirling it around in his hands. Though the blade is extremely sharp and resistant to damage, it is not indestructible, and can break if a strong enough blow is inflicted to it, as demonstrated when Baraba was able to shatter it with his mace. The Last Hero However, its nature as a sword conjured from Ace's own energy means that in effect, it is unable to be truly destroyed.

Ace Blade's first appearance, being summoned by Ace as a last-ditch attack against Doragory 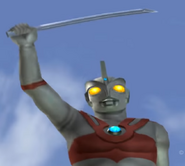 The Ace Blade, as seen in Ultraman Fighting Evolution 3