None
Abumaru (, Abumaru) is an armored cycloptic virus that appeared in Gridman the Hyper Agent episode 34, and in Superhuman Samurai Syber-Squad episode 2 where he was called Blink. 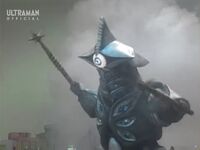