Ultraman Leo episode 42 "Terror of the Saucer Race Series - Leo Is in Danger! The Assassin Is a Flying Saucer"
Absorba (アブソーバ Abusoruba), also called Avsorva[1], was a composite of organic substances and lifeforms from Mercury and Venus merged into a jellyfish-like Saucer Creature. He appeared in Ultraman Leo episodes 41 & 42.

The third of Black Directive's deadly flying Saucer Beasts, Absorba was summoned after Black Dome was fell to Leo. Soon, the beast rose from their home world and descended to Earth. For the first time, Gen saw one of the commander’s beasts arrive on Earth and left with a friend to find the tyrant's newest pet. As he followed a boy he’d helped with bullies home, he sensed something but the boy refused to allow him to come home with him as he cared to an injured bird. The boy refused to allow them to follow, and Gen allowed it, unknowing that Black Directive had watched the entire event. The vile commander made plans to use this to his advantage. Absorba had become its smaller form and the boy took it home, unknowing of its true nature. After knocking the boy out, Absorba was sent to attack the city by its master. The beast complied, using its long tentacles to assault the city and easily destroy the military that attacked along with his electric beam. It then landed on an oil tank and used its probe to suck the oil out, draining the tank dry in seconds, then unleashing its organic cannons on the area. Finally done with his destructive warpath, the monster vanished once more. Examining the places it appeared, Gen discovered the boy’s place was in the center of the circle it formed. Later on, as Gen discovered the beast, it transformed and tried to destroy him and his two young friends, killing one of the pets of the boy who had protected it. Seeing Absorba for what he really was, the boy began throwing stones at it, alone with a young friend of Gen’s. The monster grabbed the two with its tentacles, forcing Gen to transform into Ultraman Leo. The hero quickly saved them but Absorba took the opportunity to wrap its tendrils around his throat. Try as he might, the monster proved incredibly strong. Finally, Leo managed to cut off its tentacle with his hand slicer and dodged its shots. Leo then hit it with the Leo Kick but the flying Saucer Beast was merely thrown back, unharmed. Absorba unleashed his flames but Leo managed to stay just out of reach. Using his flames to distract the hero, Absorba sent his tentacles along the ground, grabbing Leo’s legs and pulling him to the ground. Using its tentacles to hold him and pull him into his flames, it seemed this flying Saucer Beast would succeed where the previous ones failed and defeat Leo. But Leo managed to get free and roll out of the way, firing his Timer Shot into the beast's body, piercing its armor. Absorba crashed to the ground and exploded into a blazing inferno. 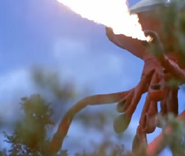 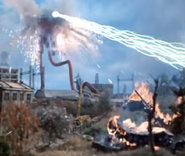 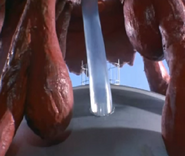 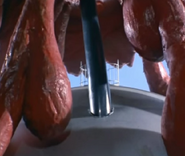 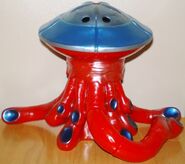 Absorba on a course for Earth

Absorba kicked in the head by Leo 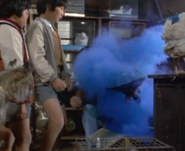 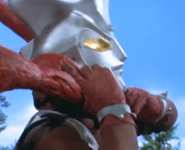 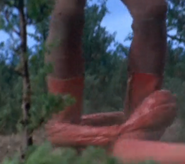