"I am a warrior of the Ultimate Life Form, Absolutian, Absolute Tartarus."

Takahiko Waki[2]
Absolute Tartarus (アブソリュートタルタロス Abusoryūto Tarutarosu) is the main antagonist of Ultra Galaxy Fight: The Absolute Conspiracy. He is a warrior from a race of aliens known as the Absolutian (アブソリューティアン Abusoryūtian).[3] He claims himself to be a warrior of The Kingdom, which belongs to Absolutian. He travels through timelines and recruits the enemies of the Land of Light before their deaths and creates their isotopes with Absolutian power.

Absolute Tartarus' name is derived from the region of the Underworld referred to as Tartarus in the mythology of Ancient Greece, which was said to be both the location for the imprisonment of the titans, as well as where the souls of the wicked spent their existence in torment. Tartarus is also considered in Greek mythology to be a primordial force or deity, alongside entities such as the Earth, the Night, Time, and etc.

Absolute Tartarus' gold body is made to contrast the silver body of Ultras.[5] In addition, Tartarus' golden armor is outlined with black sections, and he has silver skin, as well as silver armor plating on his lower legs and forehead, and pale blue eyes. Red gemstones are set into the backs of Tartarus' hands, and he wears a gold and silver garment around his waist, as well as two large golden pauldrons on his shoulders. Finally, Tartarus wears a black emblem on his chest armor, with the red seal of The Kingdom inscribed upon it.

The cloth-like pieces on Tartarus' sides are an element borrowed from the Agul Suit designed for ULTRAMAN: BE ULTRA.[6]

Absolute Tartarus is an Absolutian warrior from The Kingdom who could transcend space and time, as well as an impressive strategist adept at orchestrating plans from the shadows. As part of his plan to take over the Land of Light by force to hold control over it as a second home planet for the Absolutian people, he set out to gather accomplices and monsters from different timelines to help complete his mission. Among those he recruited and displaced are Reibatos, Maga-Orochi, Leugocyte, Mold and Juda.

Tartarus conspired with an Alien Sran that he had rescued in the past to empower Maga-Orochi on Planet Mikarito with Gudis Cells, doing so to accelerate its evolution into Magatano-Orochi and bring destruction to the universe. While Sran carried out the task he had been given, capturing and infecting Ultraman Max to use as a power source for Maga-Orochi's growth, Tartarus jumped into multiple dimensions (including those of Future Earth), but his presence was detected by Delacion of the Universal Justice in the form of a mysterious signal, who sent Ultraman Cosmos and Ultraman Justice to track its source.

After observing the Land of Light and remarking on its beauty, Absolute Tartarus first appeared in person during Ultraman Neos, Seven 21 and Ultraman 80's battle against Leugocyte on Planet Feed, enlisting Reibatos to revive a Gymaira and direct it to attack the three Ultras. After both Gymaira and Leugocyte were defeated by Neos, Seven 21, 80 and the newly-arrived Cosmos and Justice, Tartarus attempted to personally destroy all the Ultras, but Cosmos and Justice were able to block the attack, using the energy to fuse into the Super Ultraman, Ultraman Legend. The combined Ultra immediately fired his Spark Legend towards Tartarus, forcing the alien to escape.

"Gudis Cells... The Maga-Orochi egg... I thought you had all the tools you needed."
"Give me another chance... to repay you for saving my life..."

―Tartarus and Sran in the latter's final moments.

Tartarus returned to Planet Mikarito to discover that his plan was foiled by the Ultras, whereupon he found Sran to have survived his defeat by Ultraman Great, and the remains of Maga-Orochi, having been slain by the combined efforts of Max, Ribut and Xenon. After lamenting that Sran had failed to carry out his orders despite being given seemingly everything he needed to have them succeed, Tartarus eliminated the alien before departing into his portal to plan his next scheme. The Beginning

At some point, he brought Reibatos to the Future Earth World, and got him to revive the Alien Bat who once fought Ultraman Saga. Tartarus promised him a place in The Kingdom should he agree to help, and Bat went to work on creating Zett.

In addition to Reibatos, Alien Bat and Zett, Tartarus conscripted Parallel Isotopes of past villains from the Land of Light's history to his cause, resulting in divergent alternate timelines created as a result of his meddling. After retrieving Juda and Mold from their active years, he influenced both Belial and Tregear in their younger years into straying from their original path, exposing their futures as evil Ultras through informing them of their whole lives, and ostensibly promising to change their fates. His act of intervention prevented their original fall into darkness from taking place, after which he provided the duo a portion of his Absolutian powers. This change in the timeline led to numerous other ramifications, and was detected by Ultraman King.

Absolute Tartarus goes to Planet U40, thinking it could be a threat for his future plans. Ultraman Joneus appeared, and the two fought. Tartarus and Joneus fired energy bolts at each other before the former escaped, affirming his assumptions of U40 and its strongest warrior.

Tartarus later appeared on Planet Ebil while the Ultra League were fighting Zett and the Zetton army. Amidst the battle, he opened a portal and intended to abduct Yullian, only to be stopped by Ultraman Zero, who combined the Shining and Ultimate Zero to become Ultimate Shining Zero, and followed Tartarus through his portal into Narak. Though Zero held his own against Tartarus for a short time, his new form was extremely inefficient, and his energy was rapidly expended. Tartarus quickly gained the upper hand over a rapidly-weakening Zero, and defeated him, forcibly ejecting the Ultra out of Narak. Tartarus then emerged from the dimension and took Yullian, announcing his motives to the Ultra League before commanding Belial and Tregear to fire on the Ultras to defend his departure. The three of them then left with Yullian in tow. After taking Yullian to Narak, Tartarus informed her that she would be there for some time, before leaving through a portal. Yullian briefly attempted to follow him, but turned around to find another being hidden in shadow, seemingly also imprisoned there by Tartarus. Though the mysterious being was almost completely hidden, save for its eyes and Beam Lamp, she recognised who they were.The Appearance

Absolute Diavolo appeared on Ultraman Trigger's Earth and faced the three Giants of Darkness, withstanding their attacks until Tartarus arrived and stopped the fight. He demanded that they hand over the Eternity Core before leaving, threatening the three giants. The Aboslutians then sent down a Darebolic to draw out Ultraman Trigger who, while managing to defeat the monster, was hurt from the battle and the usage of the Eternity Core's energy. Diavolo then appeared and challenged Trigger, beating his other forms and forcing him to use Glitter Trigger Eternity once again. Trigger had his energy absorbed by the Absolutian until Ultraman Ribut arrived and allowed Trigger to escape. They fought until Tartarus appeared and told Diavolo to stop and remember their objective, before leaving. The Golden Threat 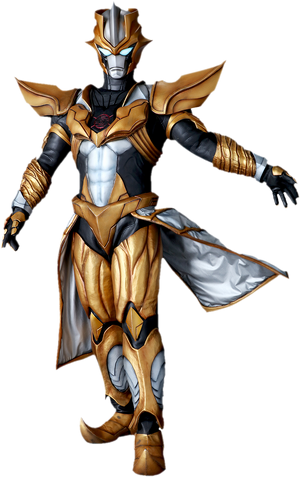 Tartarus approaching Ultraman Belial after his failed attempt at stealing the Plasma Spark.

Absolute Tartarus introduces Ultraman Belial to his allies after manipulating the timeline to prevent him from meeting and fusing with Alien Reiblood. 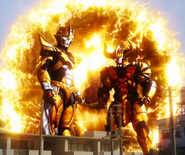 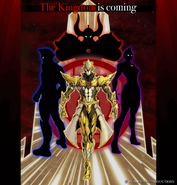