Aboras:
Powered Aboras: TBA
Aboras[2] (アボラス Aborasu) is one of two ancient Kaiju that were released in episode 19 of Ultraman. A monster whose rivalry with the fellow ancient monster Banila has persisted for centuries, the original Aboras was sealed away by humans in the distant past, but was released after scientists found and inadvertently activated the capsule he had been contained in. The stronger of the two monsters, Aboras managed to defeat Banila, but then turned his ire on the SSSP, forcing Ultraman to take action.

Aboras is one of two ancient devil beasts sealed away eons ago and the archenemy of Banila. The destructive twin behemoths remained trapped within their capsules, until the container for both capsules was unearthed, Banila's having fallen out. While Aboras’s capsule was taken by the Science Patrol, Banila’s capsule accidentally got transported to the dump, where the dirt from the excavation was taken. Aboras's capsule was tested on by scientists, but once it surged with electricity, the capsule was opened, releasing Aboras. Aboras breathed out the light blue mist at the buildings, then the buildings covered with the mist foamed up into a sticky goo and corroded.

While Banila attacked the city, the Science Patrol was preoccupied by the monster, leaving Aboras to set his own path of destruction with no opposition. After Banila was released, both instinctive rivals met at the Olympics grounds and battled viciously. Both Banila and Aboras appeared to be evenly matched in both physical strength and special abilities. However, once the Science Patrol arrived, they focused their efforts on finishing off Banila, since he was attacked the most. As the Science Patrol attacked Banila, Aboras was faced with opposition as well, but his armor prevented any damage being taken by the Science Patrol's weapons. Once they shot out one of Banila's eyes, Aboras took the opportunity to finish him off with its acidic foam, dissolving its flesh reducing Banila to nothing.

With Banila dead, Aboras focused his wrath on the Science Patrol, but then was met with more opposition, this time by Ultraman.

Aboras breathed out acidic mist toward Ultraman, jumped up to avoid it, and kicked Aboras. But its body was so tough he merely bounced off Aboras's body and fell to the ground. Aboras took that opportunity to rush him and take the mount position, hanging over Ultraman. Ultraman released his whole strength to push Aboras off, kicking it in the stomach, about to shoot Spacium Beam. One moment earlier, Aboras breathed out acidic mist. Ultraman was completely shrouded in the fog the mist had created. The fog gradually cleared, Ultraman's limbs became visible. He was completely coated with white sticky foam, immobilized in the Spacium Beam pose. Focasing all of his energy, Ultraman shook the acid foam off, then his color timer began to blink. Ultraman overpowered Aboras. The monster was destroyed after three consecutive Spacium Beams.

One of several monsters housed within the rocky confines of the disguised Baladon spaceship, waiting to be unleashed. When the Science Garrison moved in to investigate the new island, several Kaiju were let out of their cages, one being Aboras. The horned titan quickly drew battle against another of its kind, Banila. As chaos ripped through the island, the forces began to bomb it. This only halted the action for a brief second, but when Ultraman Joneus was summoned, Aboras and its monstrous comrades were ultimately destroyed by the hero's Planium Beam.

Aboras reappeared in episode 7 of the series Ultraman: The Ultimate Hero.

The two devil Kaiju met in a Los Angeles neighborhood on the outskirts of the main city where they began to battle. Aboras seemed to have won the battle with his melting liquid but was met by an ambush by WINR, whom tried to attack Aboras but with little success. Eventually, Banila used "acidic reformation" to continue his attack. As the two devil Kaiju fought each other again, Kenichi Kai turned into Ultraman Powered. During the battle, WINR used a special machine to emit 23,000 Hertz greatly weakening both devil Kaiju and allowed Powered to destroy Aboras and then Banila with the Mega Spacium Beam.

In episode 7, him along with Banila and several monsters are seen cheering on Ultraman Ginga as he fights Dark Galberos.

It is likely that Aboras returned to space in his original form after Ginga defeated Dark Lugiel.

Aboras, along with his enemy Banila, first appeared in the opening episode of Ultraman X. He was reverted back to normal from a Spark Doll after a solar flare struck Earth. Aboras decided to fight Banila in Moscow.

350 million years ago, Aboras and Banila were sealed in two capsules containing them as blue and red liquids respectively. Their captors also left behind notes, indicating that their blood was poisonous and that their foam and flame attacks can counteract each other. Their capsules were uncovered at separate construction sites a year ago, and stored at a Sizuma Foundation research center.

During Ultraman Trigger's battle against Barriguiler, a wayward shot of the monster's lightning struck their ancient capsules, deztabilising their containment. Kengo Manaka and Akito Hijiri were dispatched from GUTS-Select to secure the capsules, but they suddenly went haywire. Both Aboras and Banila emerged, and began fighting each other on sight. Kengo was caught in Aboras' foam attack, and seemingly disappeared. While figuring out how to counter them, Akito was approached by Ignis, who helped him uncode the ancient civilization's notes on the two monsters. He then uncuffed Ignis and gave him back the Black Sparklence, allowing him to transform into Trigger Dark again to fight against Aboras and Banila. Trigger Dark then forced Banila to launch its flames at Aboras' foam, freeing Kengo who transformed into Ultraman Trigger. They teamed up against the two monsters and destroyed them at the same time, while unleashing light to purify the toxic substances released from the monsters' bodies upon their destruction. Demons Rampage Again

Aboras is a monster released by the Ultra Monster Series twice. the one version has a darker blue with gold and the other is light blue with green. both have 5 points articulation. The Powered Aboras was also released By the Ultra Monster Series in 1994. he stands at 7in and is accurate to the shows. Both Aboras are very nicely done. In akin to the original Ultraman, Aboras' mold is modified from the original Red King mold.

Aboras is pretty rare, he is part of a red pack series. 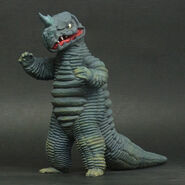 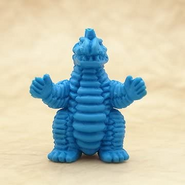 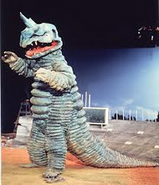 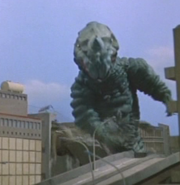 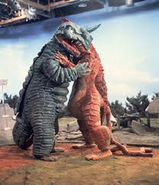 Outtake of Ultraman shaking off the acisic foam 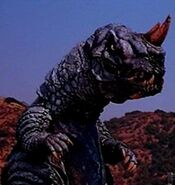 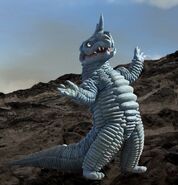 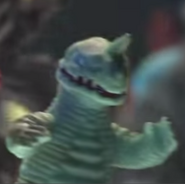 The Banila and Aboras capsules

Art of Red King vs. Aboras 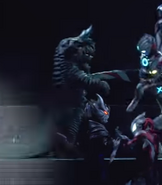 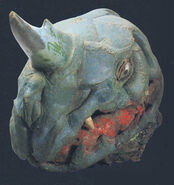 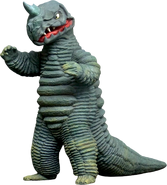