Coming from a wormhole, Σ-Zuigul's appearance prompted XIG to send Team Crow to defeat the monster. However, just in time Ultraman Gaia came in to stop him, but Σ-Zuigul uses two blue balls that hit the Ultra. Gaia could not use his finishing move, so he uses the hand cutter and destroys Σ-Zuigul. Soon the fiend reformed. Gamu went to transform, but the Esplender was covered in metal!

Surprisingly he was hit with those two blue balls and it made him stick out his arms before he got trapped in a crucifix like case. The prison goes into the monsters' chest, and it launches towards a wormhole. Hiroya Fujimiya (Agul's host) watches, feeling hopeless that he couldn't help Gamu as he had given his Agul powers to Gamu. His futile shouts seem to irritate Σ-Zuigul before he is knocked unconscious by its attacks.

He soon has a dream about the people he meet including Gamu, some children, the KBC news reporter and his dead fiance Inamori.

When he learned the mistakes he made, his will to redeem himself awakened the Blue Light of the Seas, which granted him the stronger and more agile form of Ultraman Agul Version 2 from the ocean. Agul and Σ-Zuigul go to fight but, seeing Gamu he uses the Agul Saber to free him and breaks off one of his "wings". With the advantage he uses his new Photon Screw attack, deflecting the missiles launched and blowing the robot to pieces.

After the battle, Gamu and Fujimiya soon become friends and protected the planet as the Ultramen of Earth.

Cross Catcher's effect on the Esplender 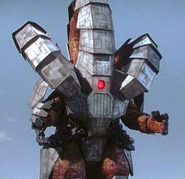 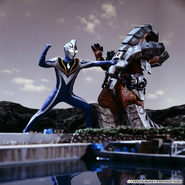 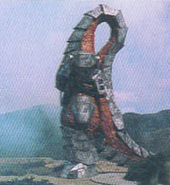